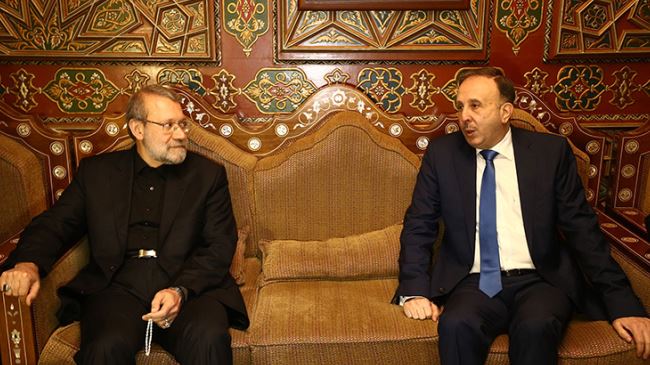 Iran’s parliament (Majlis) speaker Ali Larijani says the US-led coalition’s battle against the ISIL Takfiri militants is nothing more than a charade.

Speaking to reporters at Damascus International Airport upon his arrival on Sunday, Larijani said the fight against terrorist groups would bear fruits only through the “effort and resistance” of nations.

“The Islamic Republic of Iran supports a political solution that will prevent the continuation of the massacre in Syria by terrorists and will be based on democracy and public demand,” he said.

He reiterated that Iran would back any solution based on the Syrian people’s decision.

Since late September, the US and some of its Arab allies have been conducting airstrikes against the ISIL inside Syria without any authorization from Damascus or a UN mandate. However, the raids have so far failed to dislodge the ISIL.

Syria has been grappling with a deadly crisis since March 2011. The ISIL terrorists, who control parts of Syria and Iraq, are engaged in crimes against humanity in the areas under their control.

The ISIL militants have terrorized and killed people of all communities, including Shias, Sunnis, Kurds, and Christians.

More than 200,000 people have been killed so far in the conflict in Syria, according to UN High Commissioner for Human Rights Zeid Ra’ad Zeid al-Hussein.

Larijani arrived in Syria on Sunday as the first leg of a tour of Middle Eastern countries which will also take him to Iraq and Lebanon.

In a meeting with Syria’s Parliament Speaker Mohammed Jihad al-Laham, Larijani said the Syrian government and nation have succeeded in solving many problems and that they should currently safeguard their achievements.

“Iran stands by the Syrian government and nation,” the Majlis speaker said.

In another meeting between Syrian President Bashar al-Assad and Larijani, the two sides discussed ways to improve mutual relations in all fields and the latest developments in Syria and across the Middle East.

Larijani’s visit comes against a backdrop of clashes between ISIL militants and Iraqi and Syrian forces.