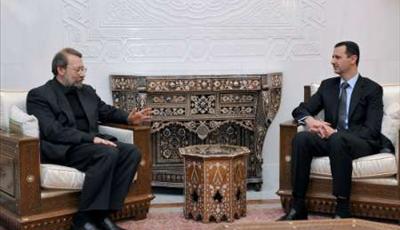 Syrians are determined to “eradicate terrorism and extremist thoughts that are menacing the region and the world,” official news agency, SANA quoted the Syrian leader as saying when he met Larijani and the the accompanying Iranian delegation.

“The President affirmed that the Syrians are also keen to proceed with and boost national reconciliations across Syria on a parallel track with combating terrorism,” SANA added.

Assad also said that Iran’s stance on Syria is of high appreciation, noting that Damascus’ “keenness to further bolster cooperation with the Iranian side in all domains in a way that serves the common interests shared by the two countries and the establishment of security and stability in the region,” according to SANA.

For his part, the Iranian speaker hailed the Syrian people for their steadfastness in countering the terrorist war targeting their security and stability.

Larijani made it clear that the people of Iran will not hesitate to provide all forms of support to Syria to the effect of further consolidating the requirements of this steadfastness and fighting terrorism and its backers, SANA reported.

The Iranian official also underscored Tehran’s support for the efforts seeking to push forward holding a national dialogue among the Syrians, which he said would maintain Syria’s sovereignty and national unity away from external interferences.