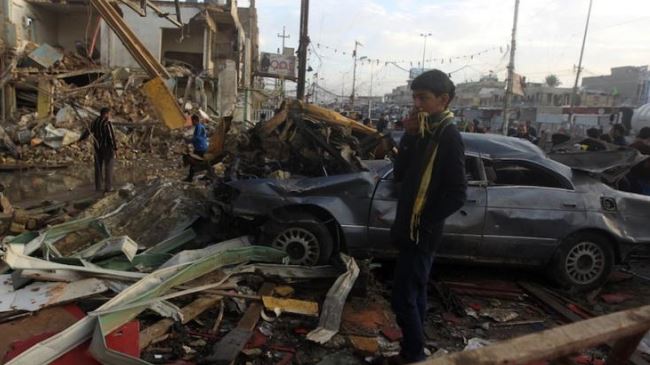 Iraqis inspect the aftermath of a car bomb attack in the Sadr City district, Iraq, December 5, 2014.

Security sources in Iraq say at least ten people have been killed in three separate bomb explosions near the country’s capital city of Baghdad.

Police officials, speaking on condition of anonymity, said three people were killed and eleven others wounded when a bomb went off near shops in the town of Taji, situated 30 kilometers (20 miles) north of Baghdad, on Saturday.

Separately, a roadside bomb struck an army patrol in the western suburbs of Baghdad, killing three soldiers and wounding six others.

Four people were also killed and nine others wounded on Saturday, when a bomb exploded on a commercial street in the town of Madain, located about 20 kilometers (14 miles) southeast of the capital.

There was no immediate claim of responsibility for the acts of violence. However, Iraqi officials usually blame such attacks on the Takfiri ISIL terrorists.

The extremist group has threatened all communities, including Shias, Sunnis, Kurds and Christians, during its advances in the violence-torn Arab state.