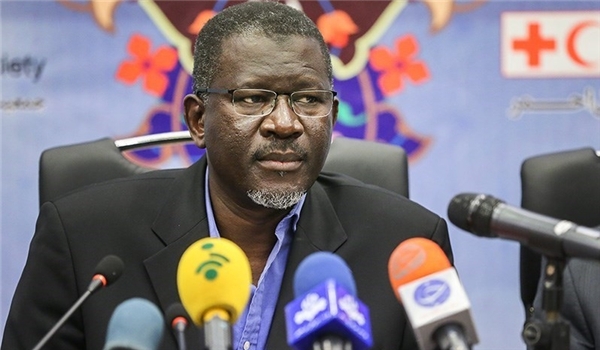 TEHRAN (FNA)- Secretary General of the International Federation of the Red Cross and Red Crescent Societies Elhadj As Sy underlined that the Iranian Red Crescent Society should not be affected by the western sanctions, and stressed that the IFRC will help the IRCS to gain access to its needed equipment despite the West’s embargos.

“If a country like Iran faces sanctions and its Red Crescent could not purchase the needed equipment like helicopter, we will do our best to resolve this problem,” the IFRC secretary general said.

He pointed to his ongoing visit to Iran, and said, “I have travelled to Iran for sharing experience and know-how and I consider IRCS a high-status society…”

As Sy noted that IFRC will surely help the IRCS to meet its needs, and said, “Commitment, expertise, management and professionalism can be seen at all levels of the IRCS.

On Monday, Iranian Vice-President for Legal Affairs Elham Aminzadeh lashed out at the West’s unilateral sanctions against Iran, calling the western embargos as international crime that threatens global security.

“The comprehensive sanctions which are of coercive, unilateral and international type can be regarded as an international crime in view of their vast destructive and inhumane impacts,” Aminzadeh said, addressing an international seminar on the negative impacts of financial and economic sanctions in Tehran.

She underlined that those who have placed Iran under sanctions should be held accountable to the international community according to the basic policies of humanity and the contents of the human rights charter.

In mid-May, Iranian President Hassan Rouhani praised the IRCS for its vital role in saving human lives not just in Iran, but also in the other countries.

He underlined that the very essence of the IRCS’s activities is in compliance with the teachings of the Holy Quran that recommends all human beings to save others’ lives.

The Iranian president reiterated that IRCS only thinks of saving humanity.

In December 2013, Head the Iranian Academy of Medical Sciences and former Health Minister Seyed Alireza Marandi in a second letter to the UN chief blasted the ignorance shown by the world body with regard to the US-led sanctions on Iran which have resulted in a shortage of pharmaceutical products in the country due to the western ban on financial transactions with Iran.

In his first letter to the UN Chief in late November 2013, Dr. Marandi lashed out at the US and the EU for threatening the lives of millions of Iranian people, specially women and children, through unilateral sanctions against Tehran, and called on Ban Ki-moon to take effective measures to exempt the banking transactions needed for supplying medical and pharmaceutical supplies to Iran from these embargos.

The Iranian Red Crescent Society is a relief, rescue, and medical aid organization in Iran. It was formed in 1923. It was changed to the Red Crescent society after the victory of the Islamic Revolution in Iran in 1979 and it has its headquarters in Tehran.