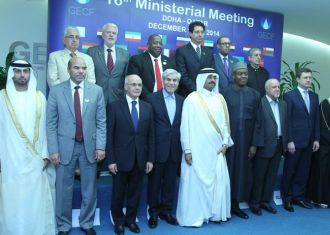 Tehran, Dec 19, IRNA – The Iranian capital city will be host to the third summit conference of the Gas Exporting Countries Forum (GECF) in 2015.

The decision was made at the 16th ministerial meeting of the GECF in Doha, Qatari on Tuesday.

According to the GECF official website, the meeting discussed the global gas market report, covering the latest developments in the energy market in general and in the gas market in particular, including but not limited to: short term trend of supply and demand for natural gas worldwide and in specific regions and countries, the evolution of LNG trade across the regions, and developments of the gas prices.

The ministers reiterated the need to monitor the challenges facing the gas industry and the secretariat will continue the evaluation of developments occurring in the energy market with a focus on the supply and demand.

They also approved Peru as the new observer member of GECF.

It was also decided that the 17th ministerial meeting will be convened in Abuja, Nigeria, in 2015.

“Of course, we discussed the current situation over prices, but only in the way of monitoring. No decisions on any actions were discussed. We have no such targets and goals,” Novak told Itar Tass.

The participants discussed a study which analyzed the situation on the gas markets, taking into consideration that the gas prices depend on oil prices on many long-term contracts.

Novak said at the 16th ministerial meeting of GECF that research work of the Forum’s secretariat was unsatisfactory and the project for creation of a GECF global gas model was unprepared.

He also found flaws in regulations of the technical and economic council and condemned the forum for the lack of progress in granting Azerbaijan membership.

Headquartered in Doha, Qatar, the Gas Exporting Countries Forum, a gathering of owners of 73% of the global gas reserves who account for 42% of global gas production, was initiated by Iran in 2001.

Lower oil prices presented a double-edged sword, according to al-Rumhy. ‘When the oil price is low, diversifying the economy is the talk of the town,’ he said.

‘Sometimes it is a catalyst for doing projects, like this [referring to the Iranian import scheme]; sometimes, because money is tight, it can slow things down,’ he elaborated.

From a production perspective, Oman’s crude oil costs are higher than other countries in the region, but there are no worries about production becoming unprofitable ‘unless the oil price goes below $30/barrel,’ a senior member of the Omani delegation said on the sidelines of the meeting.

Iran and Oman signed an initial agreement in March to build a $1 billion 200-km undersea gas pipeline by 2018, to import 10 billion cubic meters of gas per year from Iran’s giant offshore South Pars gas field. At the same time, Oman will continue to export gas in the form of LNG under long term contracts to Asian buyers, which will end around 2025, al-Rumhy said.

In 2013, GECF ministers elected Iran’s candidate Mohammad Hossein Adeli, a former governor of central bank and diplomat, as the new secretary general of the forum for the next two years.