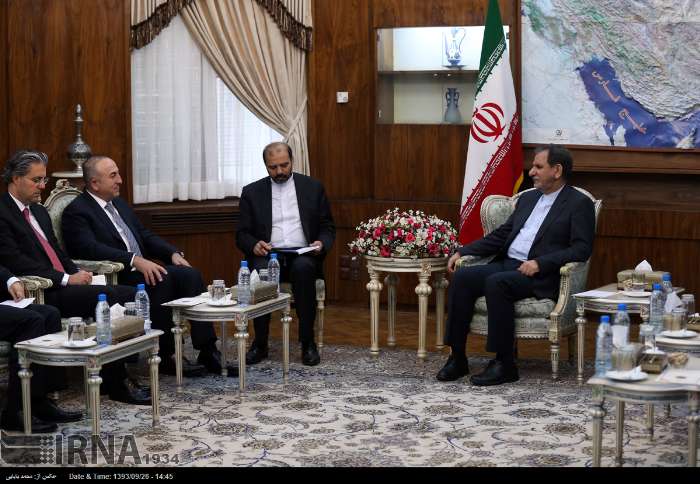 TEHRAN (FNA)- Iranian First Vice-President Eshaq Jahangiri in a meeting with Turkish Foreign Minister Mevlüt Çavuşoğlu on Wednesday underlined the need for further cooperation and consultations between Tehran and Ankara to help remove the challenges of the Muslim World.

“Iran and Turkey are two important Muslim countries and at this juncture that the Muslim World is facing many challenges, the two countries should increase their consultations,” Jahangiri said during the meeting.

The Iranian first vice-president underlined that the terrorist actions in the region have resulted in portraying an unfavorable image of Islam and provided the enemies with the opportunity to pursue their Islamophobia scenario.

Jahangiri also reiterated the importance of Iran-Turkey relations, and called on Tehran and Ankara to expedite removal of the obstacles hindering the expansion of the bilateral ties.

He pointed to the trade relations between Iran and Turkey, and said, “In their recent meeting, the two countries’ presidents have agreed to boost bilateral trade exchanges to $30 billion by 2015, which seems to be an accessible figure, but it needs a swift removal of the existing obstacles.”

Jahangiri reiterated the importance of broadening economic ties between the two countries, and said the Joint Economic Cooperation Commission meetings can provide a major help to the removal of barriers and expansion of trade relations.

The Turkish foreign minister, for his part, noted that he had constructive talks with his Iranian counterpart Mohammad Javad Zarif, and said, “Today in our joint press conference, we discussed positive points about bilateral ties …”

He reminded that Iran and Turkey have increased exchange of visits by their officials, and said growing interactions between Tehran and Ankara have become more serious and more realistic now. “And I hope that this growing trend will also continue in 2015.”

Çavuşoğlu said that Turkish President Recep Tayyip Erdogan is planning to visit Iran in 2015, and called for preparing the grounds for the endorsement of several trade and economic agreements between the two countries during the visit.

Çavuşoğlu arrived in Iran at the head of a delegation early Wednesday to confer with the country’s senior officials on the latest developments in the region, and explore new ways to enhance the Tehran-Ankara relations.

The top Turkish diplomat is in Tehran at the invitation of Zarif and is scheduled to have a meeting with President Hassan Rouhani later today.

Meeting with Parliament Speaker Ali Larijani is also on his agenda.