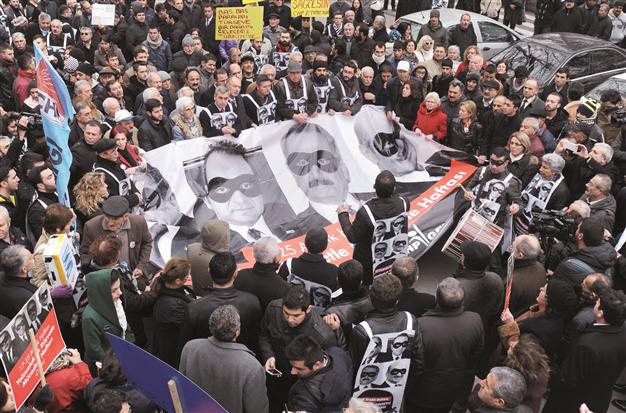 Turkish opposition to send MPs to Iran for graft probe

With the government unwilling to probe Iranian links with alleged graft in Turkey, Turkey’s opposition plans a trip to Tehran to investigate.

The main opposition Republican People’s Party (CHP) and the Nationalist Movement Party (MHP) will establish delegations made up of lawmakers and jurists who will visitIran and demand documents about Zarrab from the Iranian Parliament.

Zarrab, who used to be involved in the oil-for-gold trade with Iran, is a suspect in the Dec. 17, 2013 mass corruption probe, on claims that he bribed a number of Turkish ministers and officials to facilitate his business. Turkish media also previously reported that Zarrab is linked to Zanjani, who is accused of being involved in corrupt relations with former Iranian government officials. Zanjani is in jail in Iran while Zarrab was released soon after the Turkish probe was launched.

The MHP’s plans are still being debated within the party and a final decision will be given regarding the Tehran visit after inter-party discussions.

MHP Kahramanmaraş deputy Mesut Dedeoğlu, the only representative of the MHP in the Parliamentary Corruption Commission, which was launched to investigate the graft allegations against four former Cabinet members, said the commission “never discussed” their demands to conduct research in Iran over the allegations.

“We could not discuss Iran. We could not even listen to all the people on our list. Many people did not give their testimonies,” said Dedeoğlu.

Meanwhile, the main opposition party also plans to send a delegation to Iran and the United Arab Emirates to make investigations over the graft allegations. CHP Istanbul deputy Erdal Aksünger, a fellow member of the parliamentary commission, also complained about the ineffectiveness of the commission.

“There were problems in listening to people we wanted to listen to. We were unable to listen to them. Now we plan to establish a commission [within the party] that could access all the documents, but this is not finalized yet, it is only at the idea stage. We will discuss it and draw a framework. We know that none of the people we wanted will come to testify in the parliamentary commission so we have decided to take action as a party,” said Aksünger.

He also said the CHP plans to talk to the original, reassigned prosecutor of the Dec. 17 probe regarding the individuals they want to hear from.

Zarrab was due to appear before the commission in October, but said he was unable to give a statement as he was ill.

The decision came on Dec. 16, as the court hearing the case awaited documents from Iranian officials on his business ties in the neighboring country. Upon a demand from Bahçeli’s lawyers, the court requested information and documents from an Iranian parliamentary commission, which is currently probing Zarrab’s ties to Zanjani, an alleged partner of Zarrab who was arrested in Iran on corruption accusations. Zarrab’s lawyer has since told the court that his client is withdrawing the lawsuit.

MHP deputy group head Oktay Vural said they would continue their efforts to receive related documents about Zarrab from the Iranian parliamentary commission.