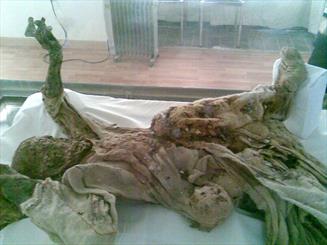 In an interview with Mehr News, Abolfazl A’ali pointed to the launch of an interdisciplinary session on studying the ‘Salt Men’ discovered during excavations in salt mines of Zanjan Province.

A’ali emphasized on medical studies on the ‘Salt Men,’ adding that three researchers would present the results of their studies including the CT-scan of fourth Salt Man and his face reconstruction, parasitological researches and studies on the effects of Chehrabad salt mine on treatment of pulmonary diseases.

“The research studies on the Salt Men started only recently and the new findings are presented each year,” Abolfazl A’ali said.

‘Salt Men’ are six mummies discovered in the winter of 1993 in Chehrabad salt mines, southern part of the Hamzehlu village in Zanjan Province. Four corpses, including a teenager and a woman are kept at the Rakhtshuikhaneh Museum in Zanjan. The head and left foot of the first Salt Man are on display at the National Museum of Iran in Tehran. The sixth corpses found in the excavation campaign 2010 were left in place at the salt mine.