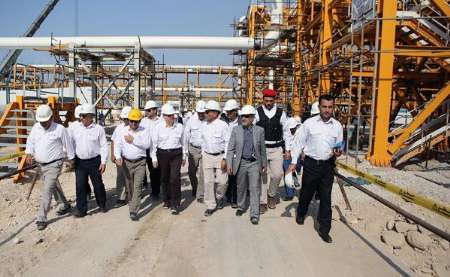 Bushehr, Dec 18, IRNA – Offshore Deputy Managing Director of Pars Oil and Gas Company Farrokh Alikani said the first operations for exploration in hydrocarbon layers of the Persian Gulf field were successfully conducted with the cooperation of POG experts as well as other Iranian firms.

The operations were aimed at evaluating reserve potentials of the field in Faraqan and Zakin and Sarchahan-Siahoo layer formations and production from Kangan and Dalan layer formations.

Pointing to the fact that at present major gas production in the Persian Gulf fields is related to Kangan and Dalan layer formations which is the joint field of South Pars, he added with respect to the studies conducted and exploration and production activities of the neighboring countries such as Qatar, Saudi Arabia, Oman, Turkey and Jordan, it seems that the future of exploration of new hydrocarbon reserves in this field will be related to soil-stone layer formations of Faraqn and Zakin.

Alikhani further remarked that the successful implementation of the operations is a new achievement in the discovery of different layers in the marine resources in south of the country and identification of these layers provides an opportunity for the exploiter to gain access to the main sources of production and reserve potentials in the process of oil and gas production.

He noted that with the achievement of the new success all previous ambiguities about major reserve layers underneath South Pars gas field have been removed and with the completion of future studies a more precise knowledge about this huge hydrocarbon reserve will be obtained.

Appreciating efforts of the Iranian experts he said all the complicated technical and operational stages were implemented by Iranian companies which can be considered a major scientific and operational achievement.

The South Pars gas field is one of the world’s largest gas resorts that is located on shared Iran and Qatar offshore border at about 3000 meters depth from the seabed of the Persian Gulf.

South Pars is located at a 105 kilometer distance to the south of the Iranian shores and is one of the county’s main energy resources.