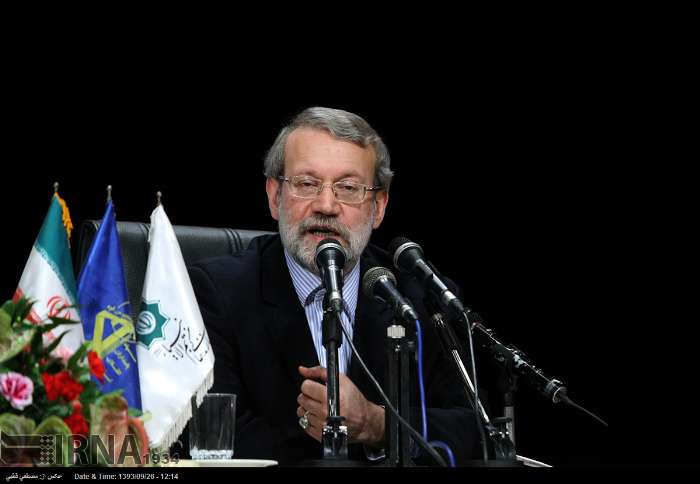 TEHRAN (FNA)- Iranian Parliament Speaker Ali Larijani said enemy states have tried all their options against Iran to bring the country to its knees, but to no avail.

“The countries which were in a hardware war against us can no more fight against us this way, given Iran’s deterrent power and the little wisdom they enjoy; they may roar, but they don’t have any determination to step on to this path; hence, they have resorted to other means and fields to fight Iran,” Larijani said, addressing the commanders and managers of Khatam ol-Anbia Construction and Development Base in Tehran on Wednesday.

“They say that all options are on the table; let them put whatever they have on the table,” he added, stressing that the enemies have already exhausted all their available operations against Iran, but to no avail.

The top lawmaker described start of gaps and spreading Iranophobia as among the enemy’s main tactics, and said, “They fill the hearts of the small regional states with fear from Iran so that they can sell them weapons; of course, some of the regional states are vigilant and some of them should grow vigilant.”

Larijani underscored that Iran doesn’t intend to make an aggression against any country, and said that Tehran has a large-scale strategy for uniting Muslim states.

“At present and in the near future, no military threat would be posed to Iran; this doesn’t mean that they (the enemies) don’t want (to threaten Iran) but (means that) they cannot as such a move would incur heavy costs on them and therefore, they have excluded it from their agenda,” Shamkhani said after visiting an exhibition of Iran’s air defense in Tehran.

He underlined Iran’s high missile power, and said, “Iran’s missile tests and ranges are proportionate to threats, but Iran’s missile power has never diverted towards unconventional weapons and this issue cannot and will never go under foreign monitoring and inspection.”

Noting that the asymmetric enemies of Iran enjoyed highly good air force power, Shamkhani said Iran has also made huge progress in the missile and air defense field to combat the same power.

He emphasized the country’s self-reliance and self-sufficiency in building different missiles, and said like the nuclear technology, Iran’s missile industry is in pursuit of peaceful purposes through deterrence.