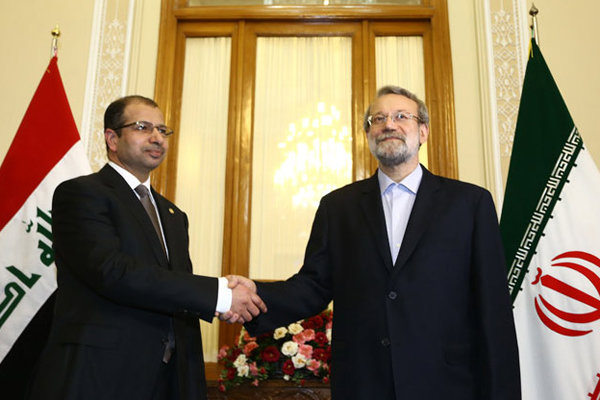 TEHRAN, Dec. 17 (MNA) – Ali Larijani, the speaker of Iran’s Parliament, pointed to the terrorist crisis in the region and emphasized that close cooperation between Iraq and Iran is needed to counter terrorism.

In a joint press conference with his Iraqi counterpart, Larijani expressed his gratitude for Salim al-Jabouri’s acceptance of the invitiation from Iran parliament and appreciated Iraqi people and government for warm hosting of Iranians during Arbaeen pocessions.

Iranian official then stated that “we had negotiations on different issues, particularly expanding cooperation. Both sides had offered valuable ideas regarding economic collaboration.”

He added Iran and Iraq had talks to improve the parliamentary relations and to establish advisory group between different commissions. “Iraq is an important country and our friend, and particularly due to the recent issues of terrorism in region, cooperation and coordination with this country is a priority.”

Larijani added “Iran has fought terrorism in action, not in mere words,” and described the approach of Western coalition impractical.

Salim al-Jabouri, Iraqi head of parliament, said “it is an honor to be in Tehran and this came true thanks to generous invitation of Mr. Larijani.” He continued, “we have discussed clearly on critical and decisive issues as Iraq is aware of the prominent role of Islamic Republic in the region.”

Iraqi official, stressing on the continuation of cooperation, clarified that Iran and Iraq should expand their security and economic relations. He said “efforts to support Iraq’s democratic procedure and establishing security and stability in this country proves the role of Islamic Republic.”

Al-Jabouri emphasized that security and stability in the region needed responsibility and cooperation of all countries, stating “all countries of the region have to move towards achieving an inclusive insight in this regard in order to realize security and realize removal of terrorism.”

Pointing to the hosting of Arbaeen pilgrims, Iraqi official said this was a political message proving that Iraq has the capability of establishing security.

Al-Jabouri also described mutual respect and common interests as the basis of bilateral relations between Iran and Iraq.

In regard to the fall in oil price, Iraqi official said, “this has affected the regional economy and made us to postpone finalization of the budget.”