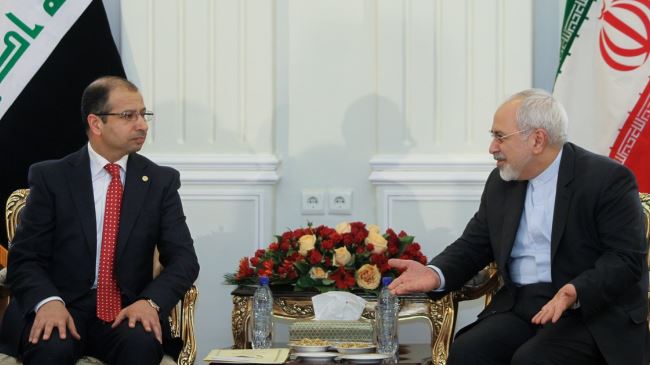 “It is regrettable that regional [oil-producing] countries are not cooperating on the falling oil prices and its negative implications,” Zarif said in a meeting with Iraqi Parliament Speaker Salim al-Jabouri in the Iranian capital Tehran on Tuesday.

Oil prices have been falling throughout 2014, getting nearly halved since June as a result of declining demand and increased supplies.

On Tuesday, the price of Brent crude oil tumbled below USD 59 a barrel for the first time since May 2009.

The five-year low was exacerbated following a refusal by some major oil producers, including Saudi Arabia, to cut their crude output.

Elsewhere in his remarks, Zarif also expressed Tehran’s readiness to promote all-out ties with its western neighbor, especially in political, economic and parliamentary fields, saying Iraq’s progress and security is intertwined with that of Iran.

“The Islamic Republic of Iran is ready, like before, to cooperate and consult with all regional countries on Iraq, and Iran is prepared to take effective measures in that regard,” Zarif added.

Jabouri, for his part, said that all Iraqi ethnic and religious groups were united in the fight against terrorist groups, including ISIL.

He also underlined the need for unity and solidarity among regional countries to contribute to stability and security, saying all regional nations, including Iran and Iraq, benefited from security in the Middle East.

Iraqi army soldiers, backed by volunteer forces, have been fighting the ISIL for several months now.

The ISIL militants, who have seized swathes of land in Iraq and neighboring Syria, have been carrying out horrific acts of violence against all communities such as Shias, Sunnis, Kurds and Christians, in both Arab states.