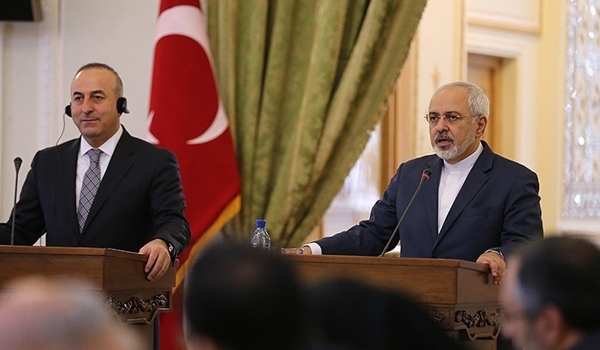 TEHRAN (FNA)- Tehran and Ankara share the view that peace should be established in Syria as soon as possible, Iranian Foreign Minister Mohammad Javad Zarif said, adding that the two countries are conferring on new ways to find a common solution to the Syrian crisis.

“Neither Iran, nor Turkey is interested to see the Syrian people be victimized by extremism, terrorism and violence and all of us are seeking establishment of peace in Syria as soon as possible so that the Syrian people can decide their future without any foreign interference,” Zarif said in a joint press conference with his Turkish counterpart Mevlüt Çavuşoğlu in Tehran on Wednesday.

“We think of peace and stability in Syria. Iran and Turkey might have different views in this regard, but both countries are cooperating to find a common solution to the Syrian problem,” he added.

Çavuşoğlu, for his part, confirmed Zarif’s remarks, and said Iran and Turkey are the only two countries which are ready for mutual cooperation in all aspects of fight against terrorism and have a firm resolve to this end.

“Of course, there are some differences in views, but they have not and will not have any (negative) impact on the two countries’ relations,” he added.

Çavuşoğlu arrived in Iran at the head of a delegation early Wednesday to confer with the country’s senior officials on the latest developments in the region, and explore new ways to enhance the Tehran-Ankara relations.

The top Turkish diplomat is in Tehran at the invitation of Zarif and is scheduled to have a meeting with President Hassan Rouhani later today.

Meetings with Parliament Speaker Ali Larijani and First Vice President Eshaq Jahangiri, too, are also on his agenda.