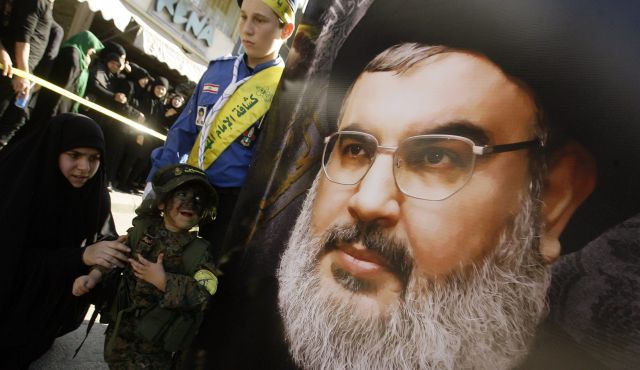 A young boy dressed in military fatigue stands looking at a portrait of the head of Hezbollah, Hassan Nasrallah, during a parade in the southern city of Nabatiyeh, Nov. 9, 2014. Photo by AFP

According to the reports, the agent was in charge of Hezbollah’s external operations, heading its “910” unit. This unit plans and executes operations directed at Israeli targets around the world. The reports, which quote security officials from the militant Islamist group, claim that the agent, identified only as M.S., posed as a businessman, which allowed him to travel freely around the globe.

According to the information that was publicized, M.S. was recruited by the Mossad on one of his trips to a country in Western Asia. He worked for the Mossad for years, helping to foil numerous Hezbollah operations that were planned in retaliation for the assassination of Hezbollah’s military operations commander, Imad Mughniyeh, who was gunned down in Damascus in 2008.

According to the Lebanese reports, M.S. gave his handlers in the Mossad the names of Hezbollah operatives in various countries, as well as disclosing plans for attacks by Hezbollah. The latest disclosure led to the arrest of an operative in Peru, in whose house explosives were found.

The Lebanese website El Nashra reported that this operative was instrumental in providing the information which led to Mughniyeh’s assassination, as well as to the killing of another senior Hezbollah commander, Hassan al-Laqis, in late 2013. Hezbollah sources said that the arrest of M.S. dealt a serious blow to Israel’s intelligence-gathering capabilities in its ongoing battle with the Islamist group over seeking out and destroying information sources – a battle being waged by both sides.