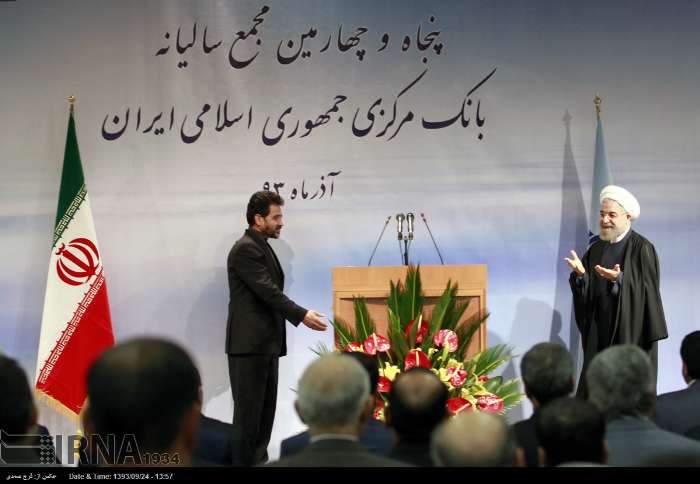 The president made the remark in an address to the 54th meeting of the General Assembly of the Central Bank of Iran (CBI).

During the meeting, Central Bank Governor Valliollah Seif submitted a report on the bank’s performance over the past year, which was characterized as being ‘promising’ by President Rouhani.

The report highlighted various examples of what Seif called successful measures taken by the CBI over the past year to bring about economic prosperity, including ‘the bank’s monetary and currency policies, timely and accurate publishing of statistics, controlling the monetary base, reducing the money supply, curbing inflation, reining in the negative economic growth, reducing foreign exchange market fluctuations, controlling inflationary expectations, and awarding loans in dollar to the manufacturing sector.’

The president called on the banking system to be ‘trustworthy, precise, and quick in providing services to the public,’ mentioning Turkey as a successful country in running healthy banking practices, the financialtribunedaily.com reported Tuesday.

He added that in his latest trip to Turkey, he was told by a high ranking Turkish official that the biggest bank of the country is an Islamic one, with a $40 billion capital. ‘This is because people trust Islamic banking operations,’ he said, adding that Islamic banking is the preferred form of banking all around the world and trusted by people from any religion because its ‘mechanisms are safe and transparent.’

Criticizing ‘the excessive number of bank branches’ across the country, Rouhani said the CBI needs to define a supervisory mechanism for establishing new branches, as presumably there are already more than enough banks to satisfy the needs of the country.

‘Banks need to invest in manufacturing activities rather than spending their capital on establishing redundant branches,’ said Rouhani, who also called on state-owned banks to award loans to manufacturing entrepreneurs.

Given the rising prices of land, commercial banks have already started buying land, especially in well-off neighborhoods in large cities like Tehran, to establish new branches. Critics say the move is only aimed at making profit from non-banking activities.

Rouhani stated that when his government took the office in 2013, the inflation rate was 40.4 percent. However, the administration managed to reduce it to 18.2 percent in a year or so, he added.

‘This shows a 22 percent decrease in the inflation rate, which is unprecedented in Iranian history,’ said President Rouhani.

He added that his first step after forming his cabinet was to establish economic stability, by adjusting the monetary base and thus reducing the inflation rate. The measure, however, was disapproved by a majority of economists who believed liquidity growth must not be controlled so that the economy returns to the path of recovery without government’s interference, the president explained.

‘They [critics] argued once the economy exits recession, it will give rise to an economic boom,’ said Rouhani, adding that ‘however, we believe prosperity cannot be reached unless the economy becomes stable.’

Emphasizing the contribution of the CBI to curbing inflation, the president said it is necessary to further decrease the current rate and achieve a single-digit inflation rate during the next Iranian year.

Referring to the poor performance of the former government and the origins of the 40 percent inflation rate, the president said Maskan Mehr – an unsuccessful housing project launched by former president Mahmoud Ahmadinejad— was the main cause of the hyperinflation.

‘The former government forced the CBI to issue 450 trillion rials ($16.6 billion) of banknotes and deliver them to Bank Maskan (a bank in charge of housing) to make up for the indiscipline in its financial policies.

Disapproving of the policies, the president said the controversial decision immediately influenced the daily lives of ordinary people, ‘especially by decreasing their purchasing power.’

However, Rouhani said that his administration aims to complete the Mehr project in order to respect the public trust.

Command Economy, Not an Option

Calling for healthy competition in the banking system, Rouhani said he does not approve of command economy.

‘I do not believe that interest rates must be changed overnight.’

However, he called for the revision of interest rates in accordance with inflation.

Unhealthy competition leads to monopoly, and lack of competitiveness creates problems for the economy, he said, adding that ‘we should find ways to spur healthy competition among banks, especially by encouraging them to reduce their interest rates on loans.’

Meanwhile, Rouhani assured the public that western sanctions will be lifted, as the world has no other choice but to negotiate with Iran.

Among other speaker attending the event was CBI Governor Valiollah Seif who referred to the current debts of the government, government agencies and banks, asking them to clear their debts as soon as possible.

He also called for a raise in the bank’s capital, as well as determining a ceiling by the government for the amount of mandatory loans that the banks are assigned to pay to businesses.

Vice President for Strategic Planning and Supervision Mohammad Bagher Nobakht, who also attended the meeting, characterized the governor’s report as ‘transparent and precise,’ saying that the report shows that the government’s economic orientation and its systematic policies has curbed inflation to a significant extent, besides preserving the peoples’ purchasing power.

The meeting of the CBI general assembly was held after a five-month delay. Section (d) of the Article 17 of the Monetary and Banking Law approved in 1972 states that “the general meeting of the central bank shall be held at least once every year at the latest by the end of Tir (July 22) of the following year.”

According to the law, the general assembly of the bank is composed of the president; the minister of economic affairs and finance; the chairman of the Management and Planning Organization (MPO) – abolished by Ahmadinejad in 2007; the minister of industry, mine and trade; and one other minister appointed by the council of ministers to represent the government.

The functions of the general meeting includes examining and approving the balance sheet of the CBI; examining the reports submitted by the CBI’s supervisory board and deciding upon the points raised therein; examining and approving the recommended appropriation of the net profit; electing the members of the supervisory board upon the recommendation of the minister of economic affairs and finance; and fulfilling other functions entrusted to it under the provisions of the act.

Members of other affiliated organizations of the CBI are also allowed to attend the general meeting and participate in the discussions, but will have no right to take part in any voting process.