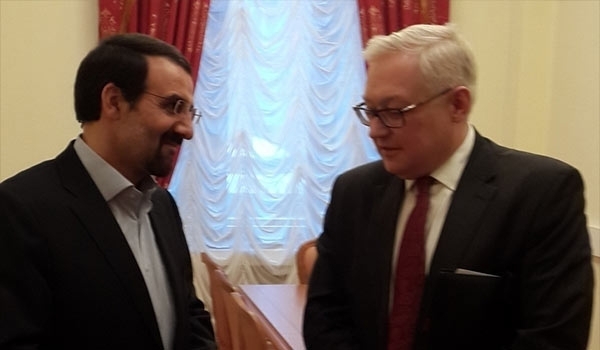 “The two sides discussed the conditions of the negotiations on Iran’s nuclear program as well as arms control and non-proliferation of the weapons of mass destruction (WMD) during the meeting,” the Russian foreign ministry announced in a statement today.

Deputy foreign ministers and political directors of Iran and the members of the Group 5+1 are in Geneva for a new round of talks at present.

The talks started on Monday and are to continue today. After a day of bilateral talks with the US delegation, Iranian Deputy Foreign Minister Seyed Abbas Araqchi last night expressed pleasure in the good atmosphere of his negotiations with the US representatives.

“We are not still in a condition to judge the final results, but (I can say that) the atmosphere of the meetings is very good, although there is still a distance to reach a solution,” Araqchi said after the end of the first day of the new round of talks between Tehran and Washington in Geneva. The talks are underway within the framework of Iran-powers negotiations over a final nuclear deal.

Mentioning that there will be bilateral talks between Iran and other members of the Group 5+1 (the US, Russia, China, Britain and France plus Germany) on Tuesday afternoon, Araqchi said, “We will also have a meeting with all members (of the G5+1) on Wednesday.”

The last round of the negotiations between Iran and the six world powers was held in Vienna from November 18 to 24.