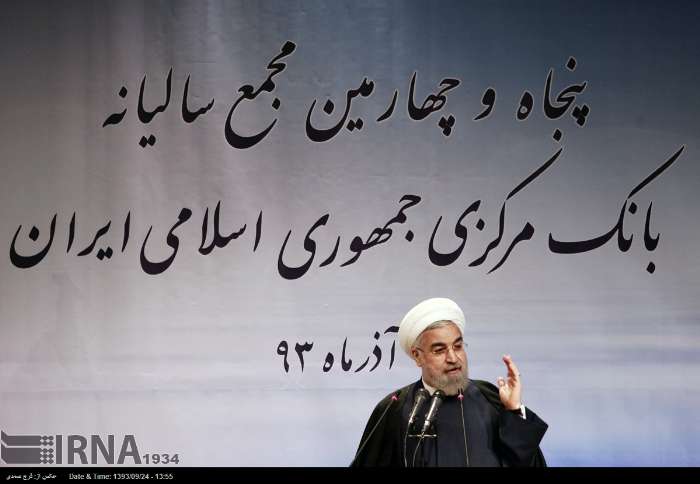 As nuclear talks between Iran and the 5+1 Powers resumed on Monday, President Rouhani struck a defiant pose before critics of the discussions.

Addressing employees of the Central Bank, Rouhani challenged, “Some people may not like to see the sanctions lifted. Their numbers are few, and they want to muddy the waters.” He insisted, “The overwhelming majority of our nation — intellectuals, academics, theologians, the greats and the leadership — are in favor of getting the sanctions removed.”

The President also returned to his optimism of a “win-win” outcome, dented by last month’s failure to reach a comprehensive deal and worries over the Iranian economy:

The people will achieve their rights.

You should also prepare for interaction with the world. You should know that in the near future many investors will come to our country.

Iran and the 5+1 (US, Britain, France, Germany, China, and Russia) began two days of bilateral talks in Geneva on Monday, their first sessions since negotiations adjourned on November 24 with a 7-month extension of interim arrangements.

Significant gaps remain between the two sides over Iran’s centrifuges for uranium enrichment, the status of its nuclear facilities, and the lifting of US-led sanctions.

The lead Iranian negotiator, Deputy Foreign Minister Abbas Araqchi, expressed “satisfaction with the general atmosphere” after talks with the US delegation on Monday.

Araqchi said there will be another round of Iran-US discussions on Tuesday morning, followed by bilateral talks with the other members of the 5+1.

Syrian Prime Minister Wael al-Halqi arrived in Tehran on Monday night for discussions with Iranian officials which are expected to last several days.

the statement on official Syrian media indicates al-Halqi will be considering Syria’s economic difficulties and how Iranian support can continue to assuage them:

The Premier said that the visit comes within the framework of the growing and booming Syrian-Iranian cooperation in economic, trade, industrial, health, and development sectors.

He noted that new cooperation prospects will be discussed in order to enhance the steadfastness of the Syrian people in the face of the economic war and the unjust blockade imposed on the country.

Al-Halqi added that this can be achieved through the Iranian credit line and the implementation of joint development projects as well as the participation of Iranian companies in the reconstruction stage in Syria.

Iran propped up the Assad regime with a $3.6 billion line of credit, including supply of oil and gas, in July 2013. However, the Syrian economy has shown signs of buckling as winter approaches. The Government has reduced subsidies on fuel amid the near-collapse of domestic energy production, and it recently devalued the Syrian pound.