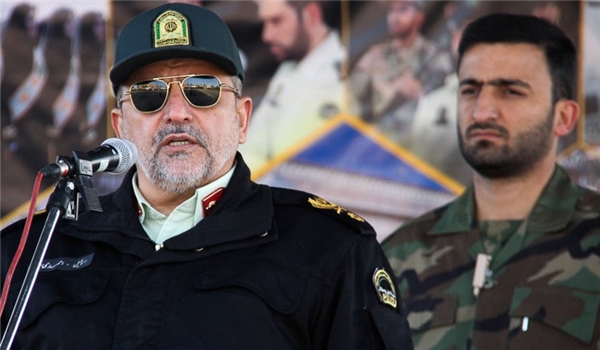 TEHRAN (FNA)- Iran’s Police Chief Brigadier General Esmayeel Ahmadi Moqaddam announced on Tuesday that Tehran had earlier warned Australia of the bad record of Haron Monis, the Sydney hostage-taker who was killed yesterday, and had demanded his extradition to Iran, but the Australian police rejected the demand.

“We collected evidence and proof and sent them to the Australian police, but because we didn’t have any extradition agreement with Australia, they didn’t extradite him to Iran,” Ahmadi Moqaddam told reporters in Tehran today.

The police chief underlined Iran’s readiness to help the Australian police in joint investigations, but he also criticized Australia’s lack of cooperation in arresting culprits.

Ahmadi Moqaddam referred to the propaganda campaign launched by some Iranian opposition satellite TV channels about the identity of the hostage-taker, and said, “It seems that there are some hands at work from behind the scene; the incident seems to exactly like a drama, of course we don’t blame Australia for it but anyway the westerners want to project the blame on others for their negligence in fighting terrorism and they want to involve the Islamic Republic of Iran in it, but Iran’s positions are clear in this regard.”

Two people died, along with a gunman, after commandos stormed a cafe in Sydney, Australia, on Monday to bring a 16-hour siege to an end.

Haron Monis, a 49-year-old man who was gunned down after taking dozens of people hostage in the cafe in Sydney for 16 hours, had expressed his allegiance to Islamic State of Iraq and the Levant (ISIL) Leader Abu Bakr Al-Baghdadi in a public statement on November 18.

Dozens of people were held by at least two armed men inside the Lindt Café in Sydney’s central business district. Footage aired by the Australian television showed a black flag with white Arabic writings being held against a window of the place by terrified hostages. The flag belonged to the al-Qaeda-affiliated al-Nusra Front, one of the Takfiri terror groups operating against the government in Syria.

Later reports identified the gunman, who was killed after commandos stormed the cafe held under siege for 16 hours, as Haron Monis, 49, an Iranian refugee who had received political asylum in Australia in 1996 and was on bail facing a number of charges.

On a website, now suspended, he describes himself as a convert to Sunni Islam. In his statement he expresses “allegiance” to ISIL and its leader Abu Bakr Al-Baghdadi, calling the ISIL Caliph as his “Imam”.

Also in his statement, the formerly Shiite Muslim underlines that he has converted to Sunni Islam, stressing that Shiites are blasphemous people.

He also underscores that the war in Iraq is not a sectarian strife, but a war between the Muslims (i.e. ISIL) and the hypocrites.

The self-styled cleric was described by his former lawyer as an isolated figure.

One of his demands was to have a flag of the ISIL, the Sunni-Takfiri militant group which recently seized territory in Syria and Iraq, to be delivered to the cafe to replace the Al-Nusra flag that he had taken to the cafe with himself.

The centre of the city was put in lockdown when the gunman seized the hostages early on Monday, forcing some of them to hold up the Al-Nusra banner at the window of the Lindt cafe.

The cafe is located in Martin Place, a busy shopping area in Sydney’s financial district.

No one yet knows the underlying cause of the attack.

Reports in the local media suggest the commandos from the Royal Australian Regiment entered the building after the gunman started firing shots.

Minutes later, the commandos with assault rifles and wearing helmets and body armour could be seen piling into the cafe, tossing stun grenades ahead of them, and apparently opening fire.

Hostages ran to safety with their hands in the air. The dramatic scenes of the rescue operation were broadcast live on television.

New South Wales police announced the end of the siege at 02:44 local time (15:44 GMT) in a tweet, promising details later.