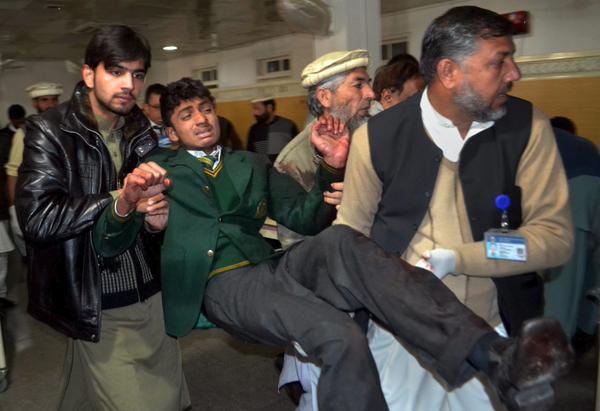 The gunmen took hundreds of students and teachers hostage in the Peshawar school and started shooting at random.

A Pakistani minister says 84 children were killed in a Taliban attack on a school in the northwestern city of Peshawar.

The attack started with the Taliban storming the military school in Peshawar in the morning hours of Tuesday and started shooting at random.

A Reuters journalist at the scene heard heavy gunfire from inside the school as soldiers surrounded it. Helicopters swooped overhead and a fleet of ambulances ferried wounded children to hospital.

Military officials at the scene said at least six armed men had entered the military-run Army Public School. About 500 students and teachers were believed to be inside.

“We were standing outside the school and firing suddenly started and there was chaos everywhere and the screams of children and teachers,” said Jamshed Khan, a school bus driver.

A teacher said that the attackers targeted the school while exams were taking place.

“After half an hour of the attack, the army came and sealed the school,” a teacher told a private television channel outside the besieged school.

“We were in the examination hall when the attack took place,” he said. “Now the army men are clearing the classes one by one.”

“Our suicide bombers have entered the school, they have instructions not to harm the children, but to target the army personnel,” he said.

“It’s a revenge attack for the army offensive in North Waziristan,” he said, referring to an anti-Taliban military offensive that began in June.

Schoolchildren cross a road as they move away from a military run school that is under attack by Taliban gunmen in Peshawar, December 16, 2014. Photo by Reuters