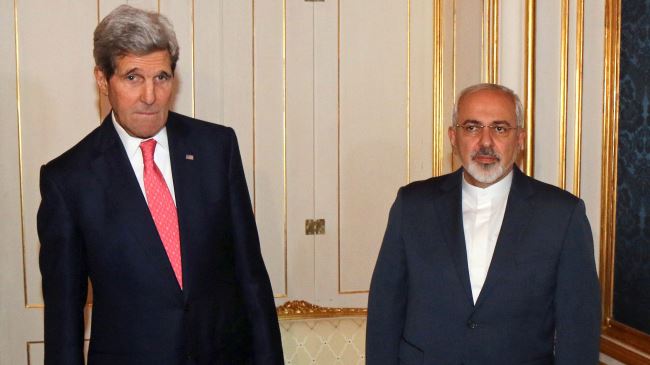 Iran, US start new round of nuclear talks in Geneva

Iran’s Foreign Minister Mohammad Javad Zarif (R) and his American counterpart John Kerry pose for a photo prior to a bilateral meeting in Vienna on November 23, 2014.

Senior officials from Iran and the United States have started a new round of talks in the Swiss city of Geneva over Tehran’s nuclear program.

The two-day discussions in Geneva will be followed by new talks between Iran and the P5+1 on Wednesday three weeks after the Tehran and the six countries failed to reach a final agreement by a November 24 deadline.

Iran’s President Hassan Rouhani said on Monday that the West has no other choice but to lift the “cruel” sanctions against the Islamic Republic.

Despite making progress, Iran and the five permanent members of the UN Security Council – Russia, China, France, Britain and the US — plus Germany failed to clinch a final nuclear deal during their previous talks in the Austrian capital of Vienna.

However, Tehran and the P5+1 agreed to extend their discussions for seven more months until July 1, 2015. They also agreed that the interim deal they had signed in Geneva last November remain in place during the negotiations.