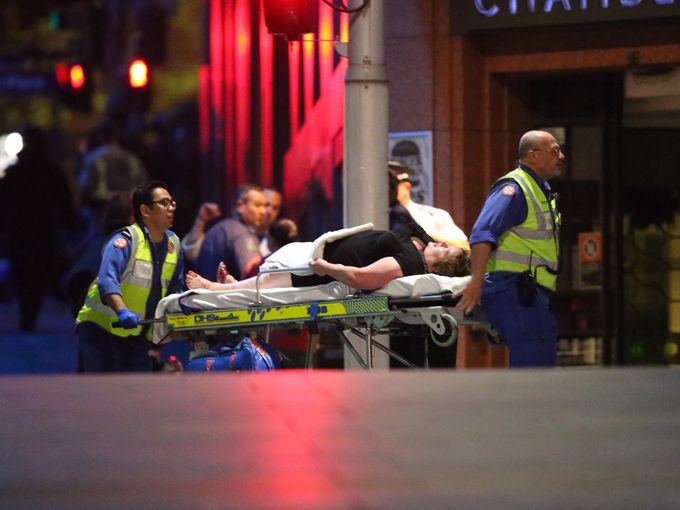 A injured hostage is wheeled to an ambulance after shots were fired ending a cafe siege at Martin Place in the central business district of Sydney, Australia, on Dec. 16. (Photo: Rob Griffith, AP)

A tense, 16-hour Australian hostage standoff ended with an eruption of gunfire and death when heavily armed police stormed a cafe in the heart of Sydney’s financial center.

New South Wales state police Commissioner Andrew Scipione said the gunman and two hostages died in the fiery end to the crisis. Scipione, speaking at a press conference early Tuesday Australian time, said four of the 17 hostages and one police officer were injured. He lauded the hostages and police for their courage as the horror unfolded.

“This was an isolated incident,” New South Wales state police Commissioner Andrew Scipione said. “This should never destroy or change the way of our life.”

After hours of little movement, live TV suddenly showed a group of about six hostages running from the Lindt Chocolat Cafe. Police then swarmed the building to the pops of gunfire and smoke grenades. Moments later, one weeping woman was helped out by the officers and at least two other people were wheeled out on stretchers.

Scipione said police moved in when they heard gunshots from the cafe.

“Incidents unfolding inside the premises led them to believe that now was the time to deploy,” he said. A 34-year-old man and a 38-year-old woman were killed in the firefight, Scipione said.

The gunman was identified as Man Haron Monis, 50, an Iranian-born, self-proclaimed Muslim cleric with a lengthy criminal record who had been free on bail.

“This is a one-off random individual. It’s not a concerted terrorism event or act. It’s a damaged goods individual who’s done something outrageous,” his former lawyer, Manny Conditsis, told the state news agency Australian Broadcasting Corp. “His ideology is just so strong and so powerful that it clouds his vision for common sense and objectiveness.”

ABC reporter Siobhan Heanue said she heard a volley of gunfire and loud explosions followed by screams, then more explosions.

“The sound ricocheted throughout the tall buildings around the area… and hostages started pouring out of the building,” she said. “Some running, some able to walk, some with their hands up, and some being carried by ambulance staff.”

It was not clear how many people were injured. ABC reported that at least three people were seriously hurt.

Earlier, the lone gunman had issued demands and claimed to have bombs scattered around the city, multiple media outlets reported. The gunman also had released videos, through some hostages, stating that he wanted an Islamic State flag and a phone call from Australian Prime Minister Tony Abbott.

Hundreds of heavily armed police officers, many in sniper positions, had taken control of the streets around the cafe in the area of Martin Place downtown.

Five hostages were able to flee to safety in the first several hours of the standoff. An undisclosed number of hostages remained in the cafe until the fiery resolution, police said.

“We are doing all we can to set you free,” Scipione had said at a news conference hours after the crisis began. The incident began around 9:45 a.m Monday local time. Sydney is 16 hours ahead of New York.

Australian news media footage had showed people in the cafe, apparently hostages holding up a black flag with Arabic writing on it reading, “There is no God but God and Mohammed is the prophet of God.”

An association of dozens of Australian Muslim groups issued a statement condemning the attack.

“We reject any attempt to take the innocent life of any human being, or to still fear or terror into their hearts,” the statement said. “We remind everyone that the Arabic inscription on the black flag is not representative of a political statement, but reaffirms a testimony of faith that has been misappropriated by misguided individuals that represent no one but themselves.”

Three people ran out of the cafe six hours into the hostage crisis. About an hour later, two women wearing aprons with the Lindt chocolate logo fled the cafe into the arms of heavily armed police officers.

Kathryn Chee, who works at the cafe, told ABC she had planned to arrive at work early when her mother told her the news of the incident.

She said she saw pictures on TV of hostages with their hands against the windows.

“Straight away, there were three people that I knew … my heart just sank,” she said. ‘It’s just a little cafe, we have regular customers, people we know their orders … we’re already making their order before they get to the counter.”

The Sydney Morning Herald reported that the gunman forced hostages to call multiple news media outlets to outline his demands, and that the hostages also posted his demands on their social media accounts.

The standoff gripped downtown Sydney, shutting down government offices, public transit and schools as it dragged through the day. The normally busy and crowded business district of the city was on virtual lockdown.

At least three hostages have been seen running from the Lindt cafe in Sydney where a an armed assailant is still holding people inside. Rough Cut (no reporter narration). Video provided by Reuters Newslook

Australia raised its terror warning level in September in response to a domestic threat posed by supporters of the Islamic State group. At the time, one man arrested during a series of raids in Sydney was charged with conspiring with an Islamic State leader in Syria to behead a random person in downtown Sydney.

Meanwhile in Belgium on Monday, police detained three men after reports of a hostage taking in an apartment building in the western city of Ghent. No one was injured in the incident.

Federal police spokeswoman Annemie Serlippens excluded any political or terror motive. Police, who blocked off a wide perimeter around the area, said it was still unclear whether they had taken any hostages.