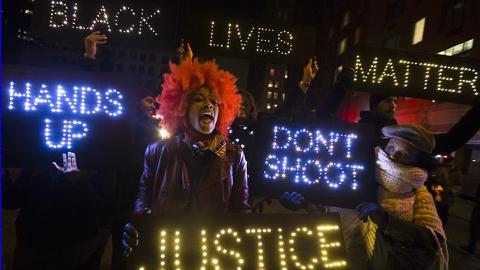 Thousands march against US police killings

Demonstrators gather in Washington and New York to rally against the killings of unarmed black men by police officers.

Thousands of demonstrators have marched in Washington and New York to protest against the killings of unarmed black men by police officers and to urge politcians to do more to protect African-Americans.

Organisers said that Saturday’s marches in Washington DC and New York City would rank among the largest in the recent wave of protests against killings that have brought the treatment of minorities by police onto the national agenda.

Decisions by grand juries to not indict the police officers involved in the deaths of Michael Brown in Missouri and Eric Garner in New York have sparked weeks of protests in major cities across the country.

Al Sharpton, a leading civil rights activist, called for “legislative action that will shift things both on the books and in the streets”.

Sharpton, whose National Action Network organised the Washington rally, urged the US Congress to pass legislation that would allow federal prosecutors to take over cases involving police.

He said local district attorneys often work with police regularly, raising the potential of conflicts of interest when prosecutors investigate incidents, he said.

Al Jazeera’s Patty Culhane, reporting from Washington, said there had been impassioned speeches and that the crowd seemed overwhelmingly positive.

Families of Eric Garner and Akai Gurley, who were killed by New York police; Trayvon Martin, slain by a Florida neighbourhood watchman in 2012; and Michael Brown, killed by an officer in Ferguson attended the protest.

“Some of the protesters are calling for the police commissioner to resign, for the officer blamed for the death of Eric Garner to be fired and for an independent prosecutor’s office to be set up to look into police brutality,” Kealy said.

“They want to see change in the judicial system, not just take to the streets, but have actual political and judicial reform.”

Hundreds of protesters also took to the streets of California, Nashville and Boston, where state police arrested 23 people after clashes broke out.

Politicians have talked of the need for better police training, body cameras and changes in the grand jury process to restore faith in the legal system.