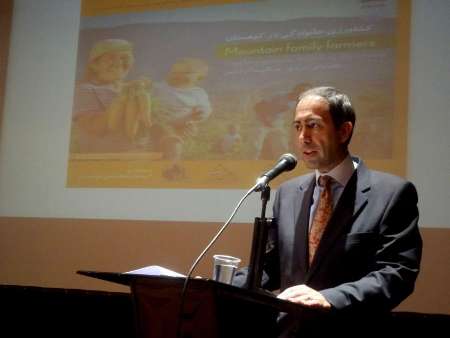 Tehran, Dec 13, IRNA – “Policy and regulatory frameworks are needed to secure the conservation of mountains in Iran, to protect and promote the effective management of these invaluable natural heritages”, said the representative of the Food and Agriculture Organization of the United Nations (FAO) to Iran.

Addressing a large audience of stakeholders from non-governmental and civil society organizations and representatives from mountaineering federations from across the country, he also highlighted the significance of building constructive partnerships and mobilising collective efforts to safeguard the world’s mountains and highlands.

Over half of the Islamic Republic of Iran is covered by mountainous regions and deserts. Mountains are not only a major source of freshwater and resilience in arid regions but, as is the case in Iran, they are a host of vital biodiversity, sheltering habitats with exceptional mountain flora, a FAO-Tehran press release quoted him saying.

Some of the species found in the mountains of Iran can only be found in these areas and therefore have been classified as endemic to the country. A proportion of these species have been categorised as ‘relic species’ due to their narrow ecological range and are considered to be symbolic of unique evolutionary phenomena. In this respect, the ecosystems in the dryland mountains of the country are deemed to be ‘remarkable’, explained the FAO representative.

FAO is one of the founding members of the Mountain Partnership (MP), which constitutes a United Nations voluntary alliance comprising over 200 members, including governments, intergovernmental organizations, civil society organizations and the private sector. FAO also hosts the Secretariat of the MP at its headquarters in Rome.

The Mountain Partnership works together with all its members, both at the global and national levels, to advocate sustainable mountain development. By joining forces, the MP members promote national as well as international initiatives and help mountain communities to overcome development challenges at the local level.

‘Mountain Farming’ has been designated as the theme for the 2014 International Mountain Day as a tribute to the International Year of Family Farming.

In his speech, Nakouzi pointed out that mountain farmers have been vulnerable to poverty, food insecurity and extreme climatic conditions due to their remote geographical location and distance from centers of power and decision-making.

He underscored the need to combine efforts and collectively find solutions to enable mountain farmers to lead sustainable lives in the future.

The significance of Mountains in promoting sustainable development can be further evidenced by the declarations made during the commemorations made only a few days ago on World Soil Day (5 December 2014).

Earlier this week the global community and government officials from the Ministry of Agriculture Jihad here in Tehran celebrated World Soil Day. On the occasion, FAO announced that a third of all global soils are degraded, due to erosion, compaction, soil sealing, salinization, soil organic matter and nutrient depletion, acidification, pollution and other processes caused by unsustainable land management practices.

“Unless new approaches are adopted, the global amount of available arable and productive land per person will be reduced by 2050 to only one-fourth of the level that was available in 1960”, FAO estimates.