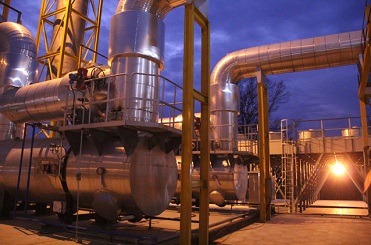 BABOL, Dec. 14 (MNA) – The most efficient power plant with an efficiency of over 45% was inaugurated in Beshel Industrial Park by Iranian minister of energy.

The small-scale generator power plant was officially inaugurated Saturday in Savadkuh County in Mazandaran Province and attended by the Minister of Energy Hamid Chitchian.

The most significant feature of this plant is its electricity generating efficiency at approximately 45.5 percent which places it at the highest efficiency among other power plants in Iran.

It has the capacity of generating 25 megawatts of electricity and is aimed at increasing the stability of the power grid in the North of Iran, reducing the production and energy transfer waste, as well as compensating for the voltage drop in the Caspian Sea littoral provinces.

The plant comprises of three 8.38 MW gas engine generator sets, one 34 MVA transformer, and three 20 KW feeders. The total cost of this project has been estimated at 18.5 million dollars.

The 25.1MW small-scale power plant in Beshel Industrial Park in the north of Iran is the most efficient plant in the country which has been designed, constructed, and launched by indigenous experts.

This project was a small part of a greater governmental plan which intends to reduce the energy waste by 10 percent during the generating, transferring and distributing of energy.