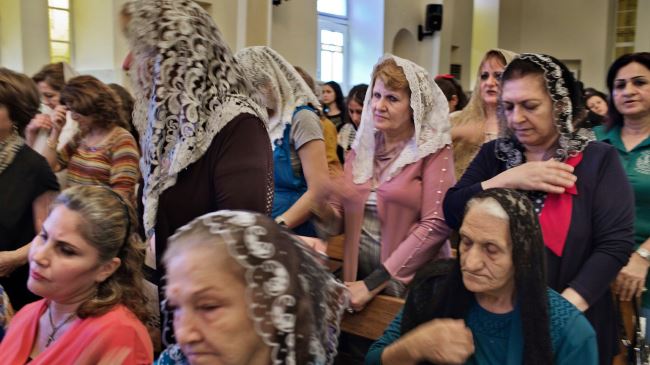 The file photo shows Christians in the Iraqi city of Mosul.

At least 160,000 Iraqi Christians have been forced out of their homes in the city of Mosul after the ISIL Takfiri terrorists seized Iraq’s second-largest city in June, a Christian lawmaker says.

“Christian families have been displaced from the city because of violence and death threats from this terrorist group,” the parliament member, Emad Yukhana, said on Saturday.

He added that few European countries had taken in some of the displaced Iraqi Christians.

“The majority of Christians have taken shelter in [northern Iraqi semi-autonomous] Kurdistan [region],” the lawmaker said.

Thousands of Iraqi Christians have been forced out of their homes in the city of Mosul in July following an ultimatum by the ISIL terrorists to them to convert to Islam, pay taxes or face death.

ISIL militants took control of Mosul in a lightning advance on June 10, which was followed by the fall of Tikrit, located 140 kilometers (87 miles) northwest of the capital, Baghdad. Tikrit has been reportedly retaken by the Iraqi army.

The militants have since been controlling some areas in northern and northwestern Iraq, committing crimes in those areas including mass execution of civilians as well as army troops and officers.

Some 1.2 million Christians were living in Iraq before the US-led invasion of the country in 2003, which overthrew longtime dictator Saddam Hussein. The figure has since dwindled to about 500,000.

The Takfiri militants have been carrying out horrific acts of violence, including public decapitations and crucifixions, against all Syrian and Iraqi communities such as Shias, Sunnis, Kurds and Christians.