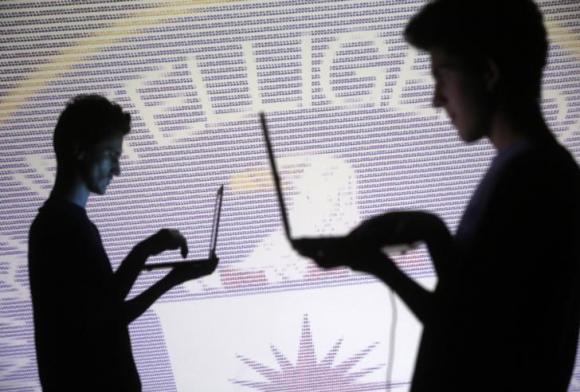 People are silhouetted as they pose with laptops in front of a screen projected with binary code and a Central Inteligence Agency (CIA) emblem, in this picture illustration taken in Zenica October 29, 2014.

(Reuters) – U.S. Attorney General Eric Holder has decided not to force a New York Times reporter to divulge the identity of a confidential source for a book that detailed a failed CIA effort to undermine Iran’s nuclear weapons program, a person familiar with the decision said on Friday.

Federal prosecutors had wanted James Risen’s testimony because they think information in his 2006 book “State of War” was leaked by former CIA officer Jeffrey Sterling, who is facing trial. In 2010, Sterling was indicted on 10 charges relating to Risen’s book, including unauthorized retention and communication of national defense information.

The source, who is not authorized to discuss the matter publicly, said Holder has ruled out forcing Risen to disclose his contact but has not made a final decision on whether the Justice Department may ask Risen to testify in Sterling’s trial on several other questions.

A federal judge has given the Justice Department until next Tuesday to make a decision on its efforts to force Risen to testify.

Representatives for the New York Times and Risen could not immediately be reached for comment.

In June, the U.S. Supreme Court rejected an appeal filed by Risen, leaving intact a July 2013 ruling by the Richmond, Virginia-based 4th U.S. Circuit Court of Appeals that said Risen must testify. The appeals court ruled that there is no “reporter’s privilege” under the First Amendment’s guarantee of freedom of speech, meaning journalists do not receive special treatment.

Holder earlier this year told a group of media executives that no reporter would ever be jailed while he is in office for carrying out news gathering duties, according to a Justice Department summary of the meeting.