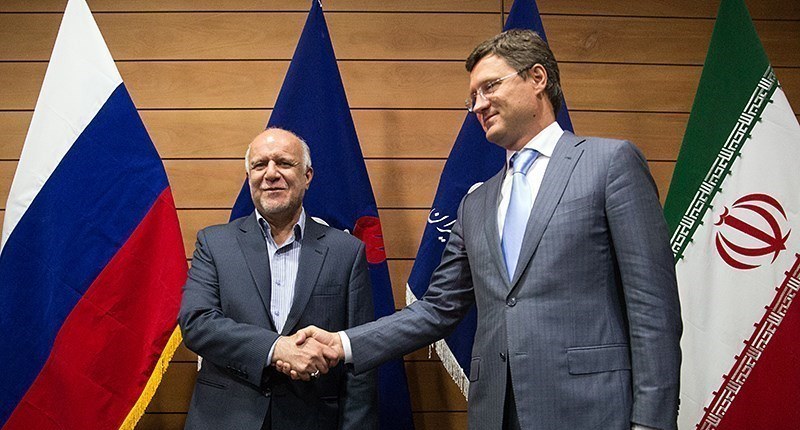 Bijan Namdar Zanganeh, who was speaking to Mehr News on Wednesday, said that Iran and Russia cooperated merely on oil and gas industries. Russian minister of economic development had already told the media that Iran and Russia would start bartering oil for essential goods. Zanganeh roundly rejected the claim, adding that no such agreement had been signed between Iran and Russia.

“According to agreements on oil and gas, Iran will use Russian technology and expertise in its oil and gas development projects,” told Zanganeh to Mehr. In last September, on the sidelines of Iran-Russia joint economic conference, Russian Federation Minister of Energy Alexander Novak had responded Mehr News question that due to similarities in properties of some of Iran’s crude and of Russian Urals, would both countries embark on oil barter for essential goods for Iran, saying that no such agreements had been signed by both sides; no article of oil and essential goods barter had been asserted in joint economic memorandum of understanding either.

Meanwhile Republic of Azerbaijan’s ambassador to Moscow has told reporters in last September that the Republic would welcome oil swap agreements with two northern and southern neighbors. Moscow Times wrote in a report last week that Russia would embark on oil barter for essential goods with Iran according to an oil-for-good program.

Alexey Valentinovich Ulyukaev told the Russian media last Thursday that he would not reject the possibility that the agreement articles would actually be implemented by the end of the year.

US Secretary of State Spokesperson Jen Psaki emphasized that Washington was ‘aware’ of Iran-Russia talks and it might trigger a US reaction if bartering violated so-called international sanction regime against Iran.

The inverse swap of oil with Russia by Iran due to similar properties of oils produced by Iran and Russia had elicited mixed commentary by Iranian, Russian and US officials in recent 2 years. First, it was Iranian and Russian high-ranking officials confirming the story, as Ishaq Jahangiri, Iran’s first vice-president told reporters about the possibility of inverse swap of oil by Iran to get essential goods from Russia; “in talks with Russians, we proposed exchange of large volumes of oil and being paid in goods, to which some had shown hostile reactions; I would tell you that if you do not come to Iran, others definitely will come, replacing you,” he had told reporters.

Mehdi Senaei, Iran’s ambassador to Moscow told Russian Kommersant Daily that Russia could built a second nuclear reactor in Bushehr as paying for oil received from Iran, thus implicitly confirming the inverse swap of oil; Senaei also pointed to ‘other goods of transportation sector’ as payment for oil or ‘building small refineries.’