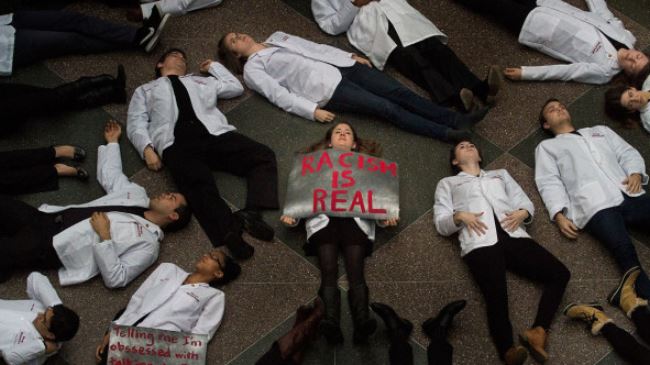 Protests against police brutality and institutional racism continue around the US following the recent grand jury decisions not to indict white police officers in the death of two unarmed black men over the summer.

Thousands of university students from 40 medical schools across the US on Wednesday staged so-called die-ins to simulate being dead to protest racial inequality in medical treatment and the police killings of African-Americans, including Eric Garner and Michael Brown.

At Harvard Medical School, some 100 students and faculty participated in the protest.

Similar protests were held in New York, Boston, Washington, Atlanta and other cities.

Student organizers said the protests were also intended to highlight the “institutional racism” in US healthcare system.

“We want to recognize that we know the medical system is not excluded,” said Julia Jeffries, a 23 year-old second-year medical student at Icahn School of Medicine at Mount Sinai in New York

“There is bias and racist practices in the field and system of medicine that we’re hoping to show that we don’t agree with,” Jeffries told the Guardian.

On Tuesday evening, hundreds of demonstrators, many of whom were student activists, marched through Berkeley, California during the fourth night of protests. The crowd briefly blocked traffic on a major highway, hurled objects at police and delayed metro and train services.

Police fired nonlethal projectiles to disperse the protesters. Dozens of people have been arrested in the university town of Berkeley since rallies began there on Saturday night.