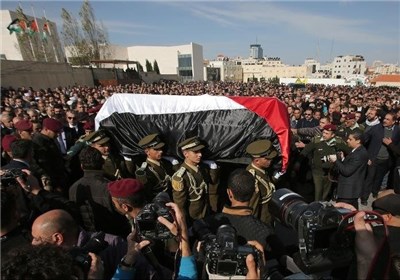 TEHRAN (Tasnim) – Thousands of Palestinians gathered Thursday to mourn Palestinian minister Ziad Abu Ein, a day after he was killed by Israeli forces during a peaceful demonstration near Ramallah.

The Palestinian leadership blamed Israel for the “killing” of 55-year-old Ziad Abu Ein.

Officials and onlookers streamed into the Ramallah headquarters of President Mahmoud Abbas in the late morning, ahead of a planned funeral procession to a nearby cemetery, an AFP correspondent said.

Uniformed Palestinians carried Abu Ein’s coffin, draped in a Palestinian flag, into the courtyard, as nationalist songs blared and mourners chanted “Revenge!” and “Your blood will not be spilled in vain!”

Schools were closed in a day of mourning and posters of Abu Ein were plastered on walls throughout the West Bank city.

A short distance away, additional Israeli troops and border guards were being deployed in anticipation of clashes with mourners and protesters, an Israeli army spokeswoman said, especially given the cemetery’s proximity to the illegal Jewish settlement of Psagot.

Abu Ein died Wednesday after a confrontation with Israeli soldiers during a protest march against settlements by some 300 Palestinians who intended to plant olive trees as a symbolic act, an AFP photographer said.

Troops fired tear gas, three soldiers grabbed Abu Ein and he was struck in the chest during the confrontation. Videos circulating online showed the soldiers pushing Abu Ein firmly in the chest and neck.

He collapsed and was treated by an Israeli army doctor, but died later in hospital.

“After hearing the results of the post-mortem, the Palestinian government holds Israel fully responsible for the killing of Ziad Abu Ein,” government spokesman Ihab Bseiso told reporters in Ramallah on Thursday.

A Palestinian minister said the post-mortem, which was carried out by a Palestinian, an Israeli and Jordanian doctors, had shown that Abu Ein was killed by the actions of Israeli troops.

“The reason for the death of Abu Ein was his being hit by (Israeli) occupation troops and because of the heavy use of tear gas,” civil affairs minister Hussein al-Sheikh told AFP.

Sheikh said Israeli forces had prevented Abu Ein from getting to a hospital quickly enough to save his life.

Israel’s health ministry said the death was caused by a “blockage of the coronary artery” which “could have been caused by stress”, adding that Abu Ein suffered from poor health including heart disease.

The incident prompted Abbas to threaten measures in response.

“All options are open for discussion and implementation,” Abbas told an emergency session of the Palestinian leadership late Wednesday, amid speculation that crucial security cooperation with Israel could be shelved.