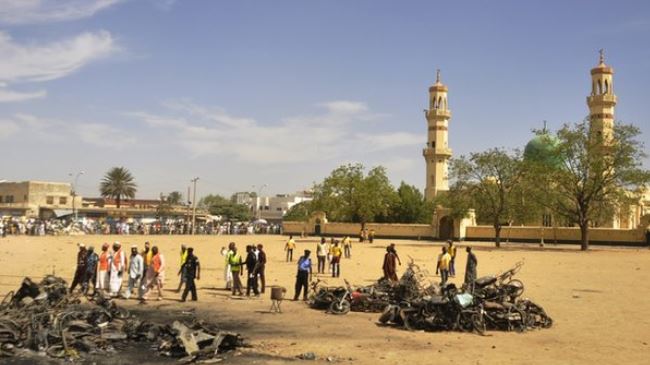 The bombing of the Central Mosque in Kano, Nigeria was reportedly the deadliest attack carried out by extremist groups in November 2014. (File photo)

A British study has estimated that more than 5,000 people across the globe were killed in the month of November in violent acts perpetrated by extremist groups.

The study, conducted by state-funded British Broadcasting Corporation (BBC), further said that 80 percent of the victims were in the four “worst-affected” countries of Iraq, Nigeria, Afghanistan and Syria.

The study, coordinated with the International Centre for the Study of Radicalisation (ICSR), documenting a total of 664 attacks in 14 nations.

It said the objective of the probe was to “quantify the human cost” of the violence carried out by extremist militant groups in the span of a single month and “to offer a snapshot of a complex movement.”

“The overall picture is that of an increasingly ambitious, complex, sophisticated and far-reaching movement,” said Director of ICSR Peter Neumann.

The study, however, does not identify the financiers of the terrorists groups that engage in such bloody violence across the globe.

It reports recording a daily average of 22 such attacks and 168 fatalities and nearly seven fatalities per hour in the month of November, blaming the Takfiri ISIL terror group – operating in Iraq and Syria – for over 2,000 of the deaths.

According to the report, of the 5,042 people killed in November, “a majority – 2,079 – were civilians,” while 1,723 were military personnel and nearly 1,000 were the terrorists that participated in the terror attacks.