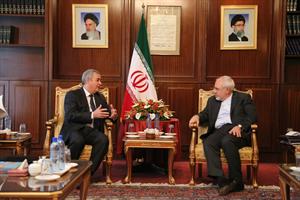 Zarif made the remarks in a meeting with Tajik Deputy Foreign Minister Nezamoddin Shamseddin Zahedi on the sidelines of the ongoing international conference on World against Violence and Extremism (WAVE).

Pointing to Iran-Tajikistan historical, cultural and religious relations, he expressed hope that mutual relations would be enhanced in all arenas.

Zarif added that Iran, Tajikistan and Afghanistan could enhance their relations in difference fields, expressing hope that the trilateral meeting between these countries could be held in a near future.

Zahedi, for his part, referred to recent visit of President Hassan Rouhani to Tajikistan, adding the visit has paved the way for expansion of all-out mutual relations.

He added the cooperation among the participant countries in WAVE conference could prevent the growth of violence and backwardness in the world.

Experts and scholars from 40 countries are participating in the WAVE conference opened by President Rouhani on Tuesday morning.

The two-day event is taking place a year after the UN General Assembly adopted President Rouhani’s proposal calling for the ‘World Against Violence and Extremism’.