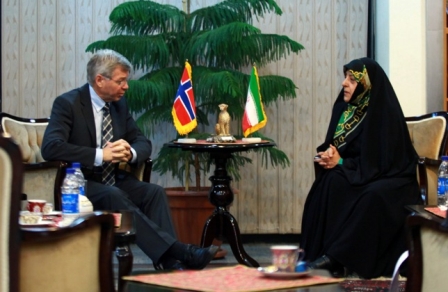 TEHRAN, Dec. 10 (MNA) – Vice president and head of Department of Environment Protection has said terrorist activities in the region has affected Iran’s environment in negative way.

Masoumeh Ebtekar, who is in Norway to visit the country’s officials, met with Kjell Magne Bondevik, a former Norwegian Prime Minister.

“Unjust sanctions along with terrorist activities in the region had harmful effects on Iran’s environment; the impact would translate into negative implications for world environment, since environment is an issue beyond political borders,” Ebtekar added.

She pointed to the history of Iran and Norway relations and expressed hopes that the establishment of a peace center in Norway would contribute positively to bilateral relations.

Ebtekar also mentioned a doctrine first proposed and promoted by former Iranian president Mohammad Khatami on dialogue of civilizations and improved international cooperation to save world a peaceful place to live; “in line with this doctrine, President Rouhani also adopted a similar view to international politics and proposed that world should unite to fight terrorism and extremism, calling on the world to accept responsibility of keeping peace and fighting any sorts of fundamentalism,” she told the Norwegian official.

Ebtekar also provided a report of Iran’s environmental challenges; “today, environment is an issue of critical importance and its positive and negative events would have overreaching impacts on the whole world; so, all countries should work together to save the environment,” she added.

On Iran’s nuclear issue, Ebtekar expressed hopes that a wise and unbiased position by the western countries during talks would help eliminate unjust and illegal sanctions against Iran.

Kjell Magne Bondevik, for his part, expressed satisfaction for the opportunity to visit Iranian official, and believed that positive nuclear negotiations would bring sanctions into an end. He praised the ‘special and supporting view propagated by Rouhani’s government on environment, and the president’s good offices to promote international cooperation especially on environment and peace and global security; “Norway welcomes to share its experiences with Iran government,” he said.

Bondevik believed that children and women were most important victims of war, insecurity, homelessness and spread of extremism and violence in the world; “Islam is a religion of peace, with many teachings on ethical and moral matters, which should be fully used along with teachings of other major religions of the world to save the peace,” he said.