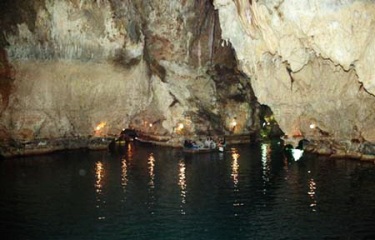 TEHRAN, Dec. 10 (MNA) – Sahoulan, a world under earth, is one of the largest water caves in Iran which attracts thousands of tourists to its natural beauties.

Sahoulan Cave is located 35 km of Mahabad in Iran’s northwestern province of West-Azerbaijan. The cave consists of several big ponds connected by water halls, very similar to its sibling in Hamedan, Alisadr.  However, only first few kilometers of the cave has been discovered. It has very beautiful and abundant icicles typically found in Alisadr Cave.

Sahoulan Cave has two main entrances connected to each other. It enjoys unique landscape in all four seasons in the region with beautiful snowy mountains in winter and lush green cover (herbs and edible) in the spring.

The history of objets trouvés in the cave dates back to the second millennium BC and according to experts, the cave had been dwelling place for prehistoric people since ancient times. Earthenware of Parthian period and a copper cup-burner of Ilkhanid era discovered in the cave corroborate the claim.

Wild pigeons and bats are the only inhabitants of the cave. The cave, which has recently become popular with  Iranian cave-lovers, quickly found its special position as one of the most important water caves in Iran. It has long porches and narrow hallways with majestic geological formations.

Deputy Head of West-Azerbaijan Cultural Heritage, Handicrafts and Tourism Organization Davoud Farazi told Mehr News that “although the cave emerged only recently as a tourism attraction, it quickly found a place in the hearts of tourists from all over the world, which indicated the unique status of this place.”