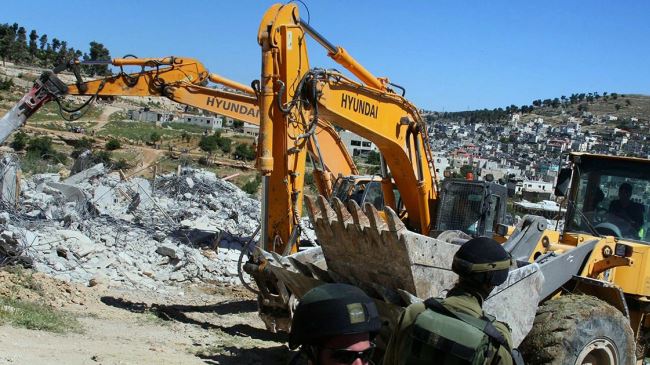 Israeli security forces have given demolition orders to the residents of homes and commercial stores in various parts of the occupied West Bank as part of the regime’s settlement expansion projects.

Israeli troops invaded the neighborhoods of Silwan and Jabal al-Mukabir on Tuesday and handed demolition orders to a number of Palestinian families, local sources said.

The residents were told to leave their homes because they were built “illegally.”

Similar orders were handed to the residents of Silwan, Jabal al-Mukabir and Sur Baher a day earlier.

In November, Human Rights Watch (HRW) urged Israel to end the destruction of Palestinian homes, saying the practice can amount to a “war crime.”

“Israel should impose an immediate moratorium on its policy of demolishing the family homes of Palestinians,” the HRW said.

The decision to destroy more Palestinian homes comes as Tel Aviv continues with its illegal settlement expansion on the Palestinian land.

Israeli settlements are considered illegal by the UN and most countries because the territories were captured by Israel in the Six-Day War of 1967, and are hence subject to the Geneva Conventions, which forbid construction on occupied lands.

More than half a million Israelis live in over 120 illegal settlements built since the Israeli occupation of the Palestinian territories of the West Bank and East Jerusalem al-Quds in 1967.