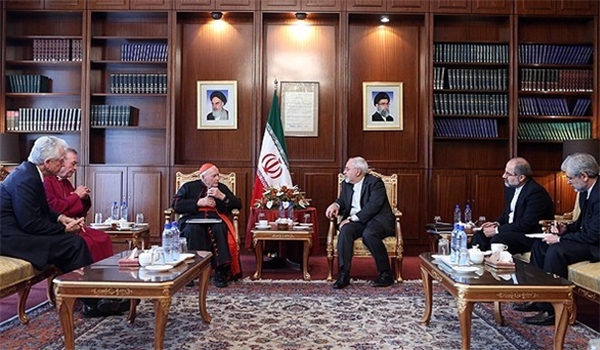 Zarif met Cardinal McCarrick and Bishop Cheen on the sidelines of the first War Against Violence and Extremism (WAVE) Conference in the Iranian capital.

Cardinal McCarrick and Bishop Cheen have traveled to Iran to take part in the WAVE conference.

During the meeting, the two sides underlined that terrorism, violence and extremism are the common concerns of all nations, and that the true followers of all religions keep away from extremism and violence.

The Iranian foreign minister and the senior American priests also laid emphasis on the necessity of inter-faith cooperation, coordination and dialogue in order to launch effective campaign against violence and extremism.

On September 25, 2013, Iranian President Hassan Rouhani proposed the WAVE initiative in his address to the UN General Assembly meeting in New York.

On December 20, 2013, Iran offered to host an international conference on UN resolution adopted based on President Rouhani’s WAVE initiative which was held in Tehran on Tuesday with several world ministers’ participation.

President Rouhani proposed yesterday that December 18 would be named as the International Day against Violence and Extremism after Iran’s proposal was approved by the UN.

“A world free of violence is materialized when the governments cooperate with each other and have coordinated policy-making and if so, the extremist groups will be marginalized,” Rouhani said, addressing the first World against Extremism and Violence (WAVE) Conference in Tehran on Tuesday.

Meantime Rouhani warned against the meddling of the trans-regional powers, saying that their intrusion in regional affairs only worsens the status quo.

Zarif announced on Tuesday that his ministry would pursue implementation of the anti-terrorism and anti-extremism proposals made by President Hassan Rouhani at the first international conference on ‘World Against Violence and Extremism’ in Tehran and other international meetings.

“We will pursue Mr. Rouhani’s proposals in different international meetings, including this meeting, and God willing we will follow up (his) viewpoints at the UN and other international bodies in a bid to achieve our common goal that is fighting against extremism and violence as well as campaigning against the anti-Islam and anti-human moves …,” Zarif told reporters in Tehran on the sidelines of his trilateral meeting with the Iraqi and Syrian foreign ministers who visited Iran to participate in the WAVE conference.