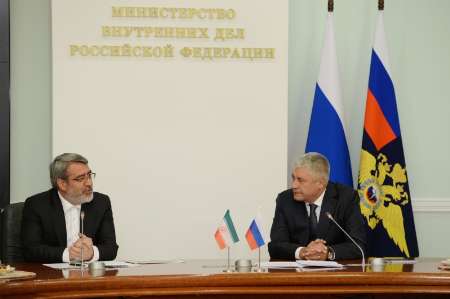 The two officials in a meeting on Tuesday discussed the action plan for the next three years in the fight against organized crimes.

During the meeting, Rahmani Fazli emphasized promotion of cooperation between Tehran and Moscow against Western pressures and sanctions.

Kolokoltsev for his part called for promotion of cooperation between Caspian Sea littoral states in the field of security particularly in fighting organized crimes.

He also underlined the importance of cooperation between the two states in Interpol.

Rahmani Fazli and Director of Federal Drug Control Service of the Russian Federation Victor Ivanov signed a document in Moscow on Tuesday to fight the production and traffic of illicit drugs to be effective from 2015 to 2018.

As per the document, Iran and Russia are pledged to establish mechanisms to exchange operational information about poppy cultivation and drug production centers.