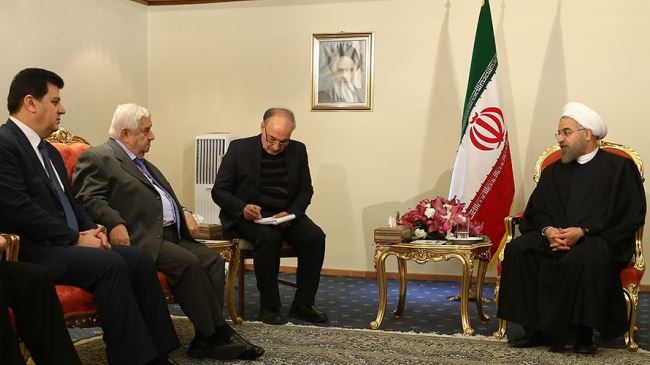 Iran’s President Hassan Rouhani says he is assured that the Syrian nation will emerge winner from the ongoing battle against Takfiri terrorists.

“We are certain that the Syrian nation will be the ultimate winner of this battle,” President Rouhani said in a meeting with Syrian Foreign Minister Walid Muallem in Tehran on Tuesday, referring to the ongoing battle between Syria and foreign-backed Takfiri terrorists.

“Today, it has become clear for the [Middle East] region and the world that the Syrian government and army are capable of countering terrorists and safeguarding the country,” Rouhani added.

He stated that foreign support for Takfiri militants has merely stoked up violence and insecurity in the Middle East.

Muallem, for his part, expressed gratitude to the Islamic Republic for its support of Syria, saying Tehran and Damascus are fighting on the same front.

The Syrian foreign minister criticized the United States and its allies for supporting the terrorists fighting the Syrian government.

Referring to the latest Israeli airstrikes on Syria, Muallem said the Zionist regime and its supporters are set to destroy the economic infrastructure in Syria and strike a blow to the Syrian nation.