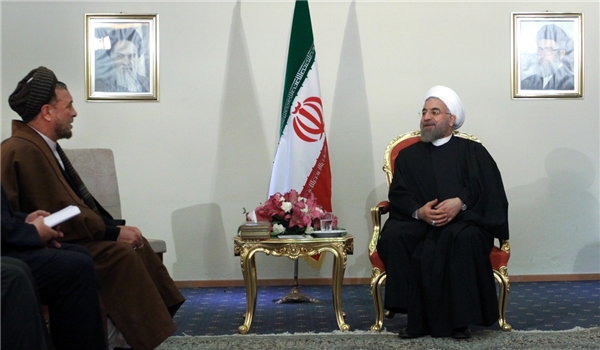 Rouhani hopes for end of violence, terror in Afghanistan

TEHRAN (FNA)- Iranian President Hassan Rouhani in a meeting with Deputy Chief Executive Officer of Afghanistan Mohammad Mohaqiq in Tehran on Tuesday renewed Iran’s support for Afghanistan, and expressed the hope that the unity in the neighboring country would result in the fading away of terrorism, violence and extremism in there.

“Afghanistan has suffered a lot from rifts and differences and we hope that the unity and brotherhood of the Afghan people will result in the eradication of terrorism and violence as well as establishment of stability and development for that nation,” the Iranian president said during the meeting on the sidelines of the first ‘World against Extremism and Violence (WAVE)’ Conference in Tehran on Tuesday.

President Rouhani further reminded that drug production is a threat to the entire region, and said all countries should make serious efforts to fight this problem.

“If Afghanistan asks for Iran’s help, Iran will be ready to provide scientific and research aid to the Kabul government to change the farming patterns and reduce cultivation and production of narcotics in that country,” the Iranian president added.

Mohaqiq, for his part, thanked Iran for its help to the Afghan nation since long time ago, and said his nation sees Iran more than just a neighboring country as they see the Islamic Republic as their big brother.

Earlier today and during his address to the participants in the first International WAVE conference, Rouhani called on the regional countries to increase cooperation and coordination to fight violence and marginalize extremist groups, cautioning that the intervention of the trans-regional powers only worsens the situation.

“A world free of violence is materialized when the governments cooperate with each other and have coordinated policy-making and if so, the extremist groups will be marginalized,” Rouhani said, addressing the conference.

Meantime, Rouhani warned against the meddling of the trans-regional powers, saying that their intrusion in regional affairs only worsens the status quo.

President Rouhani proposed today that December 18 will be named as the International Day against Violence and Extremism after Iran’s proposal was approved by the UN.

On December 20, 2013, Iran offered to host an international conference on UN resolution adopted based on President Rouhani’s WAVE initiative which is now being held in Tehran with several world ministers’ participation.