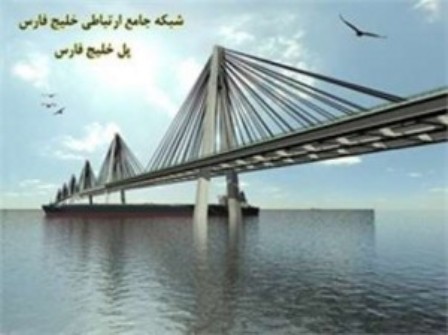 “The project is proceeding by IRGC engineering division, Khatamol Anbia, based on a 1500 billion Rial ($50,000,000) budget allocation by the former government and a 1000 billion Rial ($34,000,000) budget by the current government,” said Ali Akbar Sha’banifar in an interview with IRNA on the sidelines of signing a combination power generator station contract for the QFZ.

He said that each year 20,000 ships enter the Persian Gulf that got to Oman for getting fuel, prosing that Iran can gain its share of that business after the completion of the Persian Gulf Bridge in 2016.

Sha’banifar said that the project was scheduled to be completed in four years’ time initially, but was halted for a while for major alterations for a six month period.

The FTZ top manager said that the project’s precession so far is only 15%, adding that the Persian Gulf Bridge has two car lanes, two train railways, is 18.5 meters wide and its height varies from 15 to 23 meters from the sea level.

He said that the 2,200 meter bridge’s 460 inland pillars have already been constructed and the sea caissons of it, too, are being built under the supervision of Iranian technicians and civil engineers.