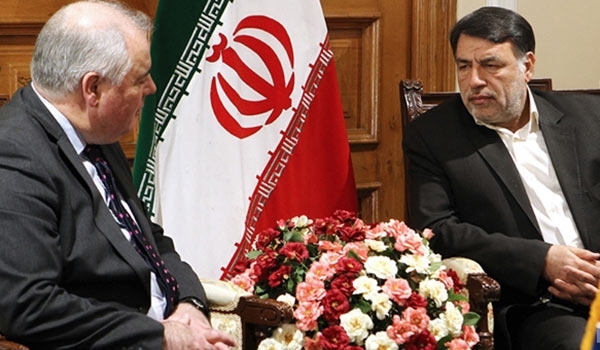 British MP terms Iran as most stable country in Mideast

TEHRAN (FNA)- Vice-Chairman of the Britain-Iran Parliamentary Friendship Group Richard Bacon said that London eyes to reinvigorate its diplomat ties with Iran that not only is the safest country in the region, but has also always tried hard to restore the same situation to the crisis-hit nations in the Middle-East.

Speaking in a meeting with Chairman of Iran-Britain Parliamentary Friendship Group Abbasali Mansouri Arani in Tehran on Monday, Bacon expressed delight for having the chance to visit Iran, and said that the Islamic Republic of Iran is the most stable country in the region.

“Iran’s efforts in anti-terrorism campaign and its continued cooperation with the international community in that campaign shows Iran’s strong and constructive role in establishment of regional stability and security,” added Bacon.

He also expressed hope that the two countries’ embassies will be opened in near future and said that the present atmosphere of mistrust should not be permitted to create an obstacle in the way of expanding bilateral political, economic and cultural ties.

Iran recalled all its staff and closed its embassy in London the same day Britain recalled its diplomatic mission in Tehran due to massive protests in front of the British embassy complex by thousands of Iranian students who demanded a cut of ties with London.

The Iranian students’ November 2011 protests at the British mission came after the Iranian legislators in an open session of the parliament the same month approved the bill of a law on downgrading relations with Britain. After the parliament approval, Iran expelled the British ambassador from Tehran.

The Iranian lawmakers initially started drafting a bill to downgrade ties with London after Britain’s direct involvement in stirring post-election unrests in Iran in 2009, but they intensified and accelerated the move after Simon Gass, the then British ambassador to Tehran, criticized the human rights situation in Iran.

Following Britain’s support for a group of wild demonstrators who disrespected Islamic sanctities and damaged private and public amenities and properties in Tehran on December 27, 2009, members of the parliament’s National Security and Foreign Policy Commission drafted bill of a law requiring the country’s Foreign Ministry to cut relations with Britain completely.

The British government’s blatant stance and repeated remarks in support of the last year unrests inside Iran and London’s espionage operations and financial and media support for the opposition groups are among the reasons mentioned in the bill for cutting ties with Britain.

Then in a meeting at the UN Headquarters in New York City on September 23, last year Iranian Foreign Minister Mohammad Javad Zarif and his British counterpart discussed improvement of Tehran-London relations, Iran’s nuclear energy program as well as regional developments.

Following a set of talks between the two sides, Tehran and London eventually agreed to resume diplomatic relations and announced the names of their non-resident charges d’affaires in October 2013.