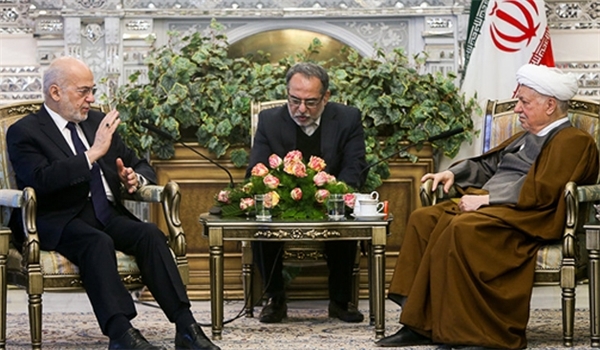 TEHRAN (FNA)- Chairman of Iran’s Expediency Council Akbar Hashemi Rafsanjani in a meeting with visiting Iraqi Foreign Minister Ebrahim al-Jafari in Tehran on Monday underlined that Iraq’s security is of vital importance to the regional states since Baghdad plays a highly precious role in resolving the problems in Syria and Lebanon.

“Iraq can play a valuable role in resolving the problems of Syria and Lebanon,” Rafsanjani said during the meeting, reiterating the importance of Iraq’s security to the region.

The chairman of Iran’s expediency council underlined that cooperation of the Muslim countries with Iraq would lead to the further reinvigoration of the Muslim nations and governments, and said, “Some regional countries should be convinced that the presence of the terrorists will set fire to the whole region.”

The Iraqi foreign minister, for his part, briefed Rafsanjani on his visits to the regional nations, and said, “Nearly all Arab countries share a common approach towards confrontation with the (ISIL) terrorist group and they have voiced their readiness for cooperation in this regard.”

Yesterday, the Iraqi foreign minister said during a joint press conference with his Iranian counterpart Mohammad Javad Zarif that Baghdad needs further cooperation and assistance from Tehran to fight against ISIL Takfiri terrorists.

Al-Jafari termed ISIL as a common threat to Iran and Iraq, and added that the threat has necessitated expansion of security cooperation between the two sides.

Al-Jafari added that regional nations must beware of the spillover of the ISIL militants’ threats.

The Iraqi minister arrived in Iran on Sunday at the head of a delegation to attend an international conference on the World Against Extremism and Violence (WAVE) in Tehran.

Soldiers of the Iraqi army and Pishmarga have been engaged in heavy fighting with the militants on different fronts and have so far been able to push them back in several areas.