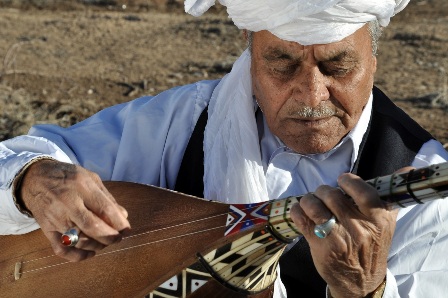 MASHHAD, Dec. 08 (MNA) – Khorasan’s veteran Dotar player Zolfaghar Asgarian, after having been hospitalized in ICU for a month, passes away.

Master Asgarian had been hospitalized for lung infection, and due to a drop in his blood plates, he gradually began to lose awareness, and after spending a month in an intensive care unit, he passed away on Sunday afternoon.

Master Asgarian, born in 1932 in Khalil Abad, Khorasan Province, was a renowned and notable Dotar (an Iranian traditional music stringed instrument) player. He began learning the Dotar as a young child under the tutelage of his father.

Asgarian had been awarded several Honorary Diplomas at the prestigious Iranian Fajr International Music Festival. He had also participated in numerous music festivals in European countries including Italy, France, Switzerland, the Netherlands and Belgium.

The Dotar (literally in Persian meaning “two strings”) comes from a family of long-necked lutes and can be found throughout Central Asia, the Middle East and as far as the North East of China in Xinjiang.
In Iran, the Dotar is played mainly in the north and the east of Khorasan as well as among the Turkmen of Gorgan and Gonbad. The instrument remains the same but its dimensions and the number of its ligatures vary slightly from region to region.