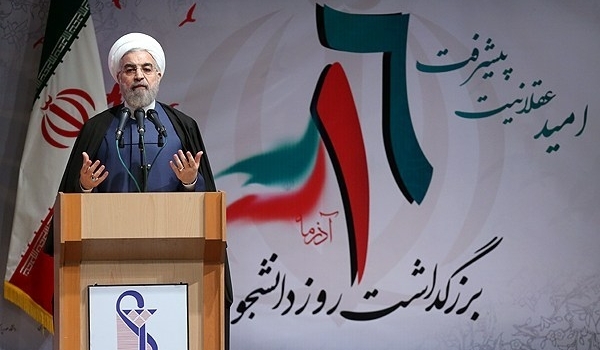 “Today the world acknowledges that the Islamic Republic is armed with the weapon of logic and wisdom; and all accept that Iran is opposed to violence and extremism,” Rouhani said in Tehran on Sunday, addressing the Iranian university students on the national ‘Students Day’.

He referred to the UN General Assembly’s last year yes vote to his proposal on December 18, which called on all nations across the globe to denounce violence and extremism, and said today Iran enjoys a different position in the eyes of the world public opinion and politicians.

Noting that all the world people now trust Iran’s security and atmosphere, Rouhani said while the Iranian hotels were empty two years ago, they have now been reserved for the next few months.

“Hundreds and thousands of companies are waiting to enter Iran in the future and make investment,” he added.

His remarks came as representatives of over 40 world states are due to travel to Tehran next week to participate in the international World against Violence and Extremism (WAVE) conference.

“The conference will be held in the Iranian capital on December 9-10,” secretary of the conference, Mostafa Zahrani, announced on Saturday.

He noted that delegations from 40 countries would participate in the conference.

Zahrani said over 200 articles from different countries had been sent to the conference, and added, “The articles will be published in two separate books in the Persian and English languages.”

Zahrani said that the conference will focus on the issue of violence from an international perspective.

On December 18, the UN General Assembly overwhelmingly voted to approve President Rouhani’s proposal, which called on all nations across the globe to denounce violence and extremism.

On December 20, Iran offered to host an international conference on UN resolution adopted based on President Rouhani’s WAVE initiative.