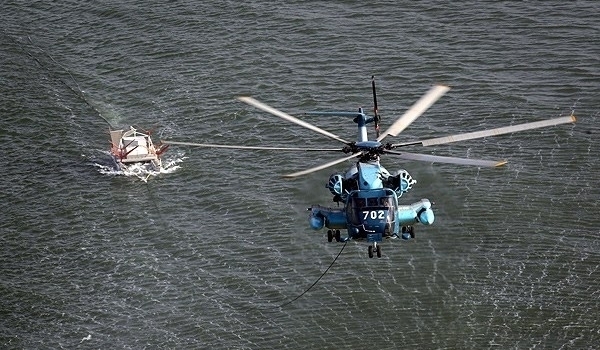 TEHRAN (FNA)- The Iranian Navy experts and pilots managed, for the first time, to carry out aerial refueling with mine-sweeper RH helicopters.

Iranian fighter jets have been carrying out aerial refueling operations for more than four decades now, but this is the first time ever that aerial refuling of RH helicopters was done in Iran, giving the choppers a longer operational range.

The operation was done in the Southern province of Bushehr and in the presence of the Iranian Army Commander, Major General Ataollah Salehi.

Iran has frequently staged its capability in air-to-air refilling of its fighter jets in different drills and other occassions.

In 2009, the Iranian fighter jets carried out refueling operations while flying over the waters of the Persian Gulf and the Sea of Oman in phase two of ‘Milad-e-Nour-e-Velayat’ aerial drills.

Wargames Spokesman General Hossein Chitforoush said at the time that given the long distance of the drills mission which reached 3,000 kilometers and more, the aircrafts needed to fulfill fighter-to-fighter and tanker refueling operations, which were both carried out successfully.

On November 18, four new home-made helicopters were unveiled in the 7th International Air and Aviation Industries exhibition on Kish Island in the presence of the Iranian Vice-President for Science and Technology Sorena Sattari.

On December 1, the Army equipped the naval force with a mine sweeper RH helicopter, which had been unveiled very recently.