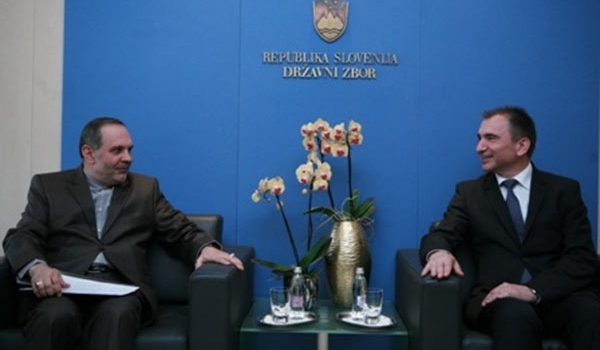 In a meeting with the Slovenian minister in Ljubljana on Friday, Darzi Ramandi underlined Iran’s readiness to develop mutual cooperation within the framework of defensive diplomacy.

The ambassador also referred to the initiative by President Hassan Rouhani in the UN General Assembly dubbed as “World Free of Violence and Extremism (WAVE)” and said problems such as terrorism, radicalism, and drug trafficking are common threats to all countries.

Veber, for his part, pointed out the importance of his visit last April to Iran as parliament speaker and his meetings with Iranian senior officials, and called the visit a big political experience.

Referring to important role of Iran in helping establish peace and stability in the region, Veber expressed concern over spread of terrorism and radicalism in the region and its dangerous consequences for Europe.

In recent parliamentary elections in Slovenia, Janko Veber was re-elected to the parliament and was appointed by the Prime Minister Miro Cerar as new Defense Minister.

Iran and Slovenia have expanded bilateral relations and mutual cooperation in different fields in recent years.