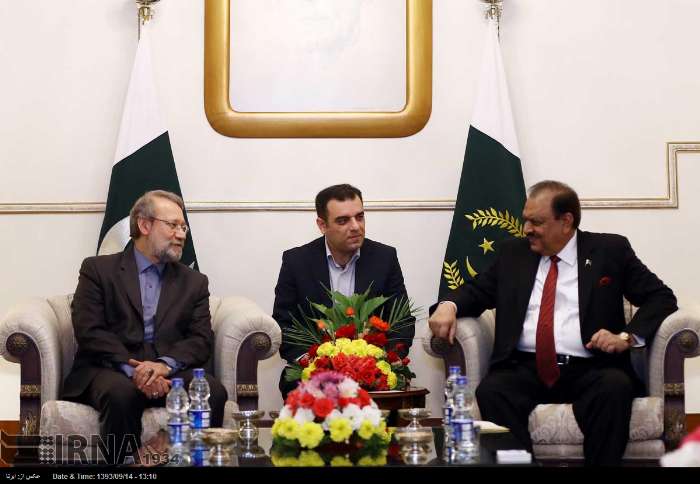 Islamabad, Dec 5, IRNA – Iranian Parliament Speaker on 2nd and last day of his visit of Islamabad was received at Pakistani Presidential Palace by President Mamnoon Hussain.

Speaker Larijani and President Hussain in the meeting in addition to surveying issues on bilateral ties between the two neighboring brother nations exchanged viewpoints on major regional and international developments.

Both sides were agreed that Iran-Pakistan economic and trade ties need to further expand and therefore the two countries’ economic activists’ greater activities was deemed as necessary.

Among the other topics of mutual interest there was the need for boosting campaign against terrorism and paying greater attention to border security and combat against extremism.

Larijani who arrived in Islamabad for a two-day visit on the first day met his host, the Pakistani Parliament Speaker Ayaz Sadiq who had invited him to Pakistan and Senate Chairman Syed Nayyer Hussain Bokhari.

The Iranian parliament speaker is scheduled to attend a press conference in Islamabad after his meeting with President Mamnoon Hussain.

He will also have an interview with Pakistan’s PTV at the end of two-day visit of Islamabad.