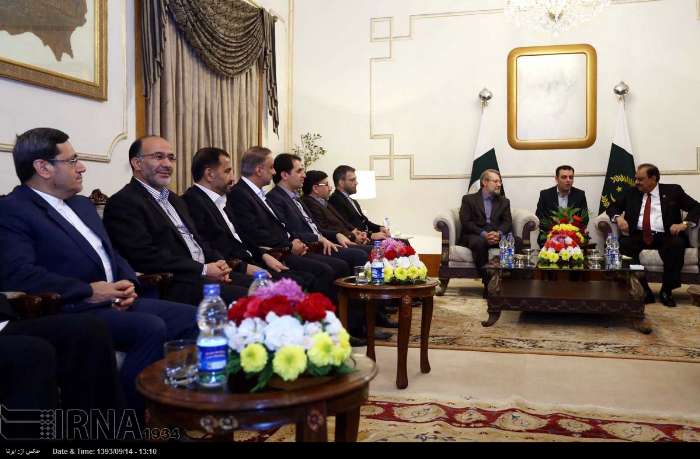 Iran-Pakistan ties should be saved from hostile plots: Speaker

TEHRAN (Tasnim) – Iran’s parliament speaker stressed on Friday that Tehran and Islamabad should remain vigilant about border problems created by their enemies who want to upset relations between the two neighbors.

“We should not let the outlaws create problems in our relations, and I believe we can jointly settle the issue,” Ali Larijani said in a Friday meeting with Pakistan’s President Mamnoon Hussain in Islamabad.

He was referring to the occasional attacks on Iranian forces along the southeast border areas, carried out by the militants coming from Pakistan.

He warned that enemies of Iran and Pakistan seek to abuse such problems, adding that extremist moves have been also created by those enemies.

In the first day of his official visit to Pakistan on Thursday, Larijani signed an agreement with Speaker of the National Assembly of Pakistan Sardar Ayaz Sadiq.

The memorandum of understanding calls for the expansion of security cooperation between the two countries with the aim of establishing sustained stability in the region.

Confronting attempts to foment discord among Islamic schools of thought and working to enhance Muslim unity are among other issues stressed in the MoU.