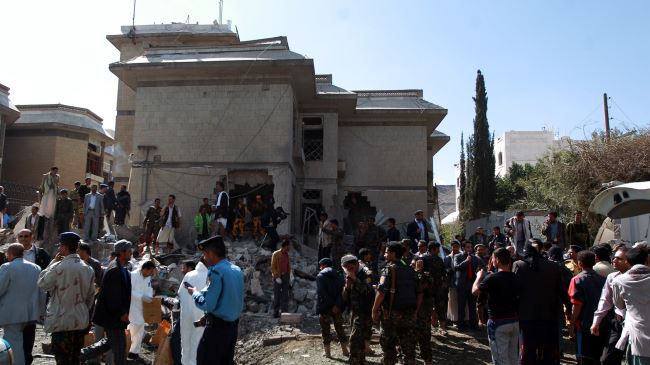 Yemeni security forces and onlookers gather at the scene of a car bomb which struck the residence of Iran’s ambassador in Sana’a on December 3, 2014.

Yemeni Foreign Minister Abdullah Mohamed al-Sayadi has denounced the recent bomb attack targeting the residence of Iran’s envoy to the country, stressing that Sana’a will seriously follow up on the issue.

Al-Sayadi made the remarks in a Wednesday telephone conversation with his Iranian counterpart Mohammad Javad Zarif after a car bomb exploded near the house of Hossein Niknam in Sana’a.

A branch of the al-Qaeda militant group in Yemen has claimed responsibility for the Wednesday blast, which killed at least three people, wounded several others and heavily damaged a number of buildings. No Iranian diplomat was hurt in the incident.

Iran has summoned the Yemeni chargé d’affaires in Tehran to convey its vehement protest to his government.

The Yemeni foreign minister also expressed regret over the incident and said he hoped Nikbakht would be released soon.

In January, another staff member at the Iranian Embassy in Sana’a, Abolqasem Asadi, was gunned down by members of a terrorist group outside the Iranian ambassador’s residence in the Yemeni capital.