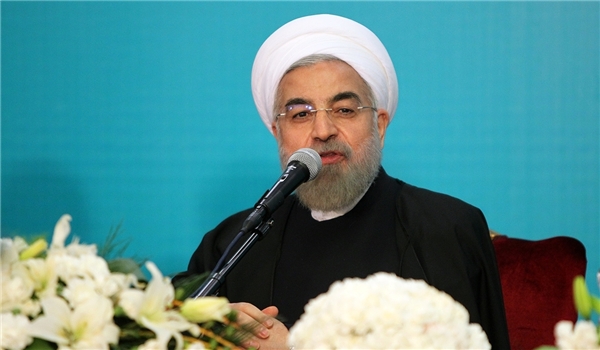 TEHRAN (FNA)- Iranian President Hassan Rouhani underscored that consolidation of trilateral ties and cooperation among the three neighboring countries of Iran, Turkmenistan and Kazakhstan will have many fruits for the entire region.

Rouhani made the remarks in a meeting with his Turkmen and Kazakh counterparts on Wednesday.

‘We should strive for closer ties to bring more stability, security and peace to the region and we should prepare the ground for improvement of relations among the three countries,” he said.

“The cooperation will bring about stability, peace and security for the region as well as economic benefits. The Iranian private sector and companies enjoy high potential and are ready to participate and make presence in any of the neighboring countries, especially Turkmenistan and Kazakhstan,” he added.

His remarks came after the joint railway, in the East of the Caspian Sea, linking Iran to Turkmenistan and Kazakhstan came into operation Wednesday morning.

Rouhani underlined that the joint railway that links Iran to Turkmenistan and Kazakhstan on the Eastern side of the Caspian Sea and came into operation on Wednesday morning will help the three nations to further broaden their relations in different areas.

“Expansion of relations among the three countries of Iran, Turkmenistan and Kazakhstan is the main goal and desire of the people of the three countries by inaugurating the international railway on the East of Caspian Sea,” President Rouhani said in the Northern province of Golestan on Wednesday, addressing a joint press conference with his Turkmen and Kazakh counterparts on the sidelines of the railway inaugural ceremony.

He noted that during the trilateral meeting held in Inche-Boroun at the Iran-Turkmenistan borderline earlier today, he and his Turkmen and Kazakh counterparts decided to expand the economic relations among the three countries and use the joint railway for the same purpose.

He pointed to the Iran-Turkmenistan friendly relations, and said, “The two countries can pave the way for joint investment by declaring Inche-Boroun as a free trade zone.”

The railway route connects the Commonwealth of the Independent States (CIS) countries to the Persian Gulf and the South East Asian nations.