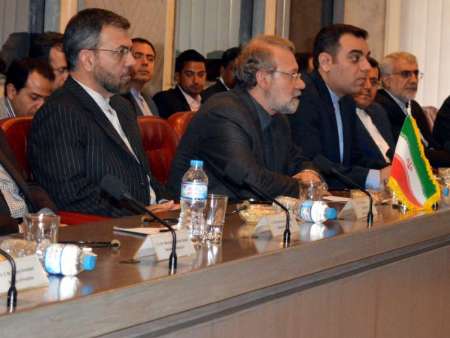 Larijani: Completion of Iran-Pakistan gas pipeline to benefit both nations

Larijani who arrived in Islamabad Thursday morning on a two-day official visit said in a meeting with his Pakistani counterpart, Ayaz Sadiq and chiefs of political parties, ‘We understand Pakistan’s problems in implementing the gas pipeline project, but we can solve them through cooperation.’

Larijani also welcomed the Pakistani oil minister’s statements on the country’s interest in importing petrochemicals and LNG from Iran.

In response to statements of the Chairman of Pakhtunkhwa Milli Awami Party, Mahmood Khan Achakzai who called for improving Tehran-Riyadh ties as prerequisite to materialization of unity among the Islamic Ummah, Larijani said, ‘We have no problem regarding ties with Saudi-Arabia. If some think so, it originates from their wrong analyses.’

Noting that Iran-Pakistan economic ties are below expectations, Larijani said that they have numerous capacities which should be used optimally.

Pakistani Petroleum Minister Shahid Khaqan Abbasi who attended the meeting said that his country has recently concluded a deal with China to complete the part of the gas pipeline on Pakistani soil within 24 months to import gas from Iran.

Describing Iran-Pakistan gas pipeline as a major project for Pakistan, he said, ‘We consider it not only a project for cooperation but also a symbol of friendship between the two nations.’

The Pakistani minister further noted, ‘We know that Iran has implemented 90 percent of the project on its soil but Pakistan has failed to do so.’